Tibetan monks sit and chant at the holy stupa, or temple, in Boudhanath as the eyes of the Buddha peer down. Photo: Seth Sherwood

Kathmandu, Nepal -- As dusk rolls in from the distant Himalayas, I nervously dart into the chaos of vehicles roaring up and down Boudha Tusal, my eyes fixed on the ornately carved stone gateway across the boulevard. 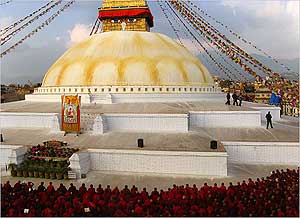 Dodging a swarm of buzzing mopeds, I duck past a taxi blasting subcontinental pop music and scoot across the path of a truck whose cab is painted with images of the long-haired Shiva and the elephant-headed Ganesh, Nepal’s ubiquitous Hindu gods. The haze of exhaust fumes rivals any Scottish mist. Traffic cops shout in Nepali as I jump onto the curb and speed between the two stone snow lions guarding the tall arch.

Suddenly, as if I have entered another world, the toxic fog dissipates and gives way to the sweet odor of burning juniper incense. Vanished, too, are Shiva, Ganesh and their Hindu brethren. Instead, the enormous disembodied eyes of the avatar of a different faith — Shakyamuni, better known as the Buddha, peer down from a soaring multitiered stupa, or temple. The Nepali pop songs fade, replaced by chanting .

“Om mani padme hum,” comes the ancient six-syllable refrain, repeated by groups of Tibetan monks in oxblood robes. “Hail to the jewel in the lotus.”

Tucked on the eastern outskirts of Katmandu, Boudhanath is both an eye of calm within the capital’s dusty pandemonium and a sanctuary of Tibetan Buddhist culture amid a nation dominated by Nepali Hindus. Many of its thousands of residents, in fact, have come directly from the old country. Since the Chinese invasion of Tibet — nearly 60 years ago — droves of refugees resettled in neighboring Nepal, transforming once-sparse Boudhanath into a bustling Little Lhasa.

Throughout its narrow dirt streets, posters of a smiling Dalai Lama grace ornate Buddhist monasteries, Tibetan folk-medicine stores, traditional artisans’ workshops, and restaurants serving everything from yak-cheese pizza to Everest brand beer. By night, masses of Tibetan worshipers light butter candles around the massive base of the centuries-old stupa — one of the subcontinent’s most sacred Buddhist structures — which resembles a white dome topped by a tall golden ziggurat.

And thanks to two of my stepbrothers — who moved to Boudhanath in the early 1990s to study Tibetan Buddhism — my own family has become a de facto member of the dynamic community. From its holy sites to its ramshackle cafes, Boudhanath is the global hub where our far-flung members reunite.

On a clear December morning, the dozens of craft stalls and artisans’ shops that ring the stupa are abuzz with creation and commerce. Pockets of travelers and religious pilgrims are already pulling out their crumpled 100-rupee bills at shops with evocative names like the Himalayan Singing Bowl Center and Maa Statues and Handicrafts. A few groups fill the travel agencies, booking trips to Nepal’s rugged outback on Yeti Airlines or Cosmic Air.

When the lunch hour rolls around, I take a seat at one of the communal tables at Tibet Kitchen (Boudha Stupa, 977-1-214-3445). Admittedly, you don’t come for the atmosphere, which seems inadvertently tailored to foster a Buddhist mindset: The glacial service offers ample time to contemplate eternity, and the spartan décor gives new meaning to emptiness. But few local joints serve up a tastier initiation into Boudhanath’s culinary pleasures — or a cheaper one.

A Tibetan meal should — must — involve momos, the half-moon dumplings that power every activity, spiritual and secular, around Boudhanath. I nod for my favorite, buffalo, whose normally jerky-tough meat gets diced, spiced and steamed into sublime tenderness. Red chili sauce, explosive enough the launch a new Sputnik, is the transcendent complement.

Next is a steaming bowl of thukpa, a thick bowl of zesty chicken noodle soup, followed by a dessert of pak-tsoe, a warm quicksand of mashed and sweetened barley topped with molten butter. (Backing it with salty butter tea, I wonder if I shouldn’t visit the nearby Lord Buddha pharmacy for a traditional Tibetan alternative to Lipitor.) Altogether, the meal is the kind of comfort food that your grandmother might serve — if your grandmother was named Tenzin and lived on a mountainside.

For all of its color and life, though, Boudhanath is beset by some very visible of poverty as well — as is all of Nepal. Year after year, I encounter the same homeless people in its lanes: the blind woman who beats a small drum for coins; the shoeshine boy with no shoes of his own. Fortunately, some enterprising souls are starting innovative initiatives to lift the less-fortunate from the streets.

A garbage-strewn street west of the stupa delivers me to the Rokpa Shop (977-1-449-6096; www.rokpa.org), which is run by a Swiss charity. Several women sit on the floor sewing richly brocaded local silk into stylish meditation cushions, purses, document folders and scarves. Formerly destitute, they have been trained in handwork skills and now receive a living wage in return for their creative prowess.

Within the doorway of Authentic Himalayan Textiles (Shechen Monastery Road, 977-1-449-0073) are a scattering of Tibetans — some men, some women — in the process of unraveling old moth-eaten aprons, nomadic tents, monks’ robes and salt bags. The venerable threads, made from prized yak wool and deeply colored vegetable dyes, will soon be refashioned into intricately embroidered new carpets and wall hangings.

It’s not only the textiles that get a new lease on life.

“More or less everything here is recycled — including the people,” says the owner and designer, Pasang Tsering, explaining that he has hired and rehabilitated many poor “mountain women” who migrate to Katmandu and men who had been “drinking or beating their wives.” The store also pays for the education of employees’ children, who sometimes assist in transforming the cast-off garments.

Spiritual initiation arrives on Saturdays. On a bright morning, my parents, stepbrothers and I join dozens of foreign travelers and long-time Western expatriates in a lecture room in Boudhanath’s White Monastery to partake in a decades-old local tradition: the free weekly lecture on Buddhism offered by Chokyi Nyima Rinpoche, the institution’s head monk.

Sitting cross-legged on an elaborately cushioned chair, he launches into the day’s lofty themes — evil and suffering — making clear that, in the Buddhist view, their roots are neither divine nor metaphysical nor even found in the material world. Rather, they are the product of disturbing emotions — “attachment, aversion, closed-mindedness, envy, pride, arrogance”— that plague our minds.

“But it’s not the ultimate goal just to achieve personal happiness in itself, a sort of selfish peace,” he continues through a translator. “We must look at all sentient beings and, seeing that they are suffering, wish from the bottom of our heart that they may be happy and have all that causes them happiness — and that I will take responsibility for this, that this is my duty.”

In some far-off room of the monastery, horns wail, bells ring and drums pound, like a cosmic orchestra tuning up. None of the assembled listeners even cocks an ear. All attention is focused on the monk’s words.

“There is no greater good that we can do,” he goes on as the Himalayan light and echoes of distant instruments fill the room. “This is the greatest gift that we can give.”