Hemis, India -- In his controversial 1894 account of Jesus’s lost years La vie inconnue de Jesus Chris (The Unknown Life of Jesus Christ), Russian journalist Nicolas Notovitch claimed that it was in Hemis, a tiny town about 40 km from Leh, that a previously unknown Gospel, “Life of Saint Issa, Best of the Sons of Men,” originated. 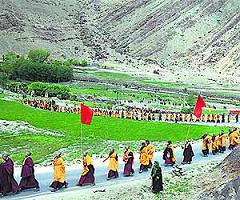 The gospel is said to be an account of Jesus’s travels in India and east Asia. While the town’s links to Christianity have never been proved, over the last 400 years, it has become one of the most important centres for Mahayana Buddhism in the world.

At an altitude of 12,000 feet, the journey to Hemis is not recommended for the faint-hearted. About two kilometres before the monastery, all traces of a motorable road disappeared. Our driver informed us that from thereon it would have to be on foot. For those fond of trekking, the climb up to the monastery is exhilarating. For others, the steep slopes and pebbled paths can prove to be exhausting.

Over the years, Hemis has become synonymous with the monastery. Most of its local population choose to reside in Leh and the surrounding villages located at a lower altitude of 11,000 feet. The only inhabitants are 350 monks who live and train here in austere simplicity. There is little by way of comfort, and the temperatures border on the extreme.

Ladakh - Zanskar  Valley Of Zanskar (Darcha - Padum)  Himalayan trekkers’ wishwww.Shikhar.comHow to Do Meditation?  Learn How To Do Meditation Easily  Download Free Lessonswww.SilvaUltraMindSyPlanning to Visit Ladakh  Tell us your requirements and  Get customized Tour Deals & Offers.IndiaTravelBookings.

The Hemis monastery was established in 1672 by the Drukpa lineage, a sect of Buddhism that owes its origin to Naropa, a Bengali Pandit. It is now the oldest and wealthiest monastery in the country.

Most monks are bought to the monastery when they are about five, the age at which they begin learning Buddhist scriptures. Over the next 10 to 15 years, they live here in complete isolation except for a few trips to Leh to stock up on essential commodities. Despite their training, the loneliness gets to them.

One of the most awaited days on the calendar, therefore, is the Hemis festival, held each year in the last week of June or early in July. We too were here to attend the festival, which marks the birth anniversary of Guru Padmasambhava, who is said to have taken Tantric Buddhism from India to Tibet and Bhutan in the 8th century.

This year, visitors were lucky to see a fascinating spectacle. A train of monks in maroon marching up the mountains, carrying sacks of plastic bottles, wrappers and soft drink cans — the detritus left behind by tourists of the world . This was part of a 400 km long pilgrimage that 750 Drukpas went on, led by the 12th Gyalwang Drukpa, the current spiritual head of the lineage.
Crossing arduous high-altitude mountain passes from Manali to Hemis, they attempted to raise awareness about a very modern cause — global warming. Along the way, they collected 60,000 discarded plastic bottles, 10,000 chewing wrappers and hundreds of soft drink cans. Bio-degradable canvas bags were distributed among the 30 villages that the Drukpas crossed and the message was loud and clear: “Say no to plastic.” The return of the monks from their long march marked the beginning of the festival this year.

When the performances began, it was easy to see why this tiny town is a big draw. Tourists from all over the world climbed on to the rooftop overlooking the monastery’s courtyard to get a better view. There was a riot of colours as the monks, who train for months for this spectacle, streamed out into the courtyard, dancing to invoke the spirit of Lord Buddha. About mid-way through the festivities, a thangkha (Buddhist embroidery on a patch of silk) depicting the image of Guru Padmasambhava was lowered from one of the high windows.

Visitors to the fest are also advised to go on a hunt for souvenirs. Local Ladakhi people put up stalls selling artefacts, silver and gold turtles, exotic Tibetan jewellery and antique candlesticks. But the real artwork lies in the Hemis Museum, one of the oldest repositories of ancient Buddhist art. The museum, opened to the public just two years ago, displays artifacts preserved by the monastery for more than 400 years. Some of the intricately embroidered thangkas displayed in the museum are said to be a thousand years old.

As the day’s festivities came to an end, Buddhists from South-east Asian countries made a beeline for the 12th Gyalwang Drukpa. At 46, the current Gyalwang Drukpa is a perfect blend of the modern and the traditional. When not at Hemis, he blogs to reach his disciples all over the world. His speech is littered with colloquial fillers such as “whatever” or “sort of” and he always carries his Blackberry. But he warns Ladakhi youth against “looking for shortcuts to enlightenment” and says “the Internet cannot be your guru”.

The monks we left behind to another year of rigorous isolation in this little town perched on steep Himalayan cliffs would agree.

GETTING THERE
You can take a direct flight to Leh from Mumbai or Delhi. The last 30 minutes of the flight are a visual delight as the majestic Himalayas span out underneath. Hemis is about 40 km from Leh; local cabs charge about Rs 2,500 to and fro from the festival. Buses too leave every hour for the Hemis monastery on festival days.

BEST TIME TO VISIT
The festival is usually held in the last week of June or the first week of July.

ACCOMMODATION
There is no accommodation in Hemis; you have to stay in Leh. There are various hotels to suit every budget. We recommend Hotel Namgyal Palace, a mid-budget hotel at a stone’s throw from the main Leh market. Check online for more details.

EATING
There is no restaurant at Hemis. So you may want to carry energy bars or chips since the festival goes on till the evening. There are kiosks that sell water. Leh has a horde of restaurants in the main market that serve everything from Indian to Continental cuisine. Tibetan Kitchen is highly recommended for local Tibetan cuisine. No meat is served anywhere in Leh on the two festival days.

SHOPPING
Pick up replicas of traditional Buddhist thangkas, pashmina shawls and sculptures of Tibetan gods from the kiosks set up outside the Hemis monastery. Traditional Tibetan jewellery in silver and precious stones, although a tad expensive, is also sold there.