Waking up the spirit, and taste buds, too

YEONGGWANG, SOUTH KOREA -- One thing is for sure about Yeonggwang. The people here are extremely proud of their heritage, and better yet, seem to know how to preserve it. 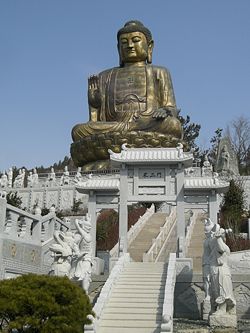 The county located in the western crest of the Korean peninsula is mostly known among Koreans for its gulbi, or salted and dried yellow corvina. Yeonggwang people, however, seem agitated at the mention, and are eager to explain that their county is about so much more.

What, indeed, is less known is that it prides itself as the sacred grounds of three major religions in the country -- Buddhism, Won-Buddhism and Christianity.

"We believe that it was through Yeonggwang -- Baekje at the time -- that Indian Monk Marananta first entered the peninsula," said Park Hae-ja, cultural commentator of Yeonggwang county.

The monk is believed to have first spread the teachings of Buddha in the country upon arriving here some 1,700 years ago, holding the statue of the Amita Buddha to his chest. There are, however, no official records of Monk Marananta's activities in Korea.

Through the Japanese colonial period (1910-1945), Yeonggwang also became the home of another religion, Won-Buddhism that is the reformed version of Buddhism. It is now Korea's indigenous religion followed by nearly 300,000 people.

Won-Buddhism's creator Sotaesan was born and grew up and attained enlightenment in Yeonggwang. It has Sotaesan's birthplace and the first temple of the Won-Buddhism all well maintained in the area. A beautifully-kept village of followers who live together under the teachings of Won Buddhism is also located here.

Less well-maintained but surely significant enough is the heritage of Christianity.

Upon the outbreak of the Korean War in 1950, Christianity in the country began to spread faster, and Yeonggwang was a place where 77 Christian pilgrims lost their lives to communist invaders.

A site at Yeomsan-myeon of the county sits a monument to honor the deaths of these pilgrims, right next to Yeomsan Church that served as a sanctuary for Christians.

Yeonggwang is an apt destination for non-religious travelers as well, thanks to its beautiful west coast views and plenty of things to eat, not to mention the fun of meeting the enthusiastic and friendly locals.

Walk along a local market and you might be startled at first of the people's loud candor -- like demanding to know why you are taking pictures of their shrimp. But you will soon learn that is just the way they speak, and soon enough you will find yourself being led by the market owner telling you which angle is better.

Yeonggwang is said to be the sacred place for all three religions, but Buddhism is probably the best represented one.

The most famous one of them is Bulgapsa temple sitting at the hill of Mount Bulgap. It is said to be the oldest Buddhist temple in South Korea.

Daeungjeon of the temple is said to have been built by Monk Marananta when he arrived in the Baekje Kingdom through Jin Dynasty of China. Some also suggest that the temple was built by Monk Haengeun in the year of King Mu (600-640) during the Baekje Dynasty. Which one is true remains uncertain.

Three years ago, the county decided to facelift the areas surrounding the temple, and succeeded in getting all the houses and shops that crowded the spot, replacing them with a large green field that serves as a park.

Restaurants instead are lined up outside the gate, clean and welcoming.

Walk towards the temple, and the show-stopper is undoubtedly the red Sangsahwa flowers. The flowers are named for the leaves never being able to "meet" the flowers as the stem is lean and long. It blooms between August and September each year, creating a breathtaking red carpet of some 500,000 pyeong, covering the walking trails that lead up to Mount Bulgap.

A trickling stream of water alongside the pathway decorated by Sangsahwa flowers surely helps one take a deep breath and relax.

The Bulgapsa park also offers information on great hiking trails that could be as short as 5.8 kilometers or as long as 8.2 kilometers, depending on which route you take.

While the temple's main Daeungjeon remains intact, the first major repair works of some of the structures are currently on-going abs will continue until January of 2010.

Another place to visit to feel the presence of Buddhism is the Beobseongpo, where Yeonggwang believes was the place that Monk Marananta first stepped on.

Just at first glance, one can feel that a lot of effort and investment have been put into the place, which overlooks the scenic West Sea, against the clear blue skies of autumn.

The most impressive structure is the four-face Buddhist statue, standing 23.7-meters high built Gandharan style, mimicking the shape of a grotto temple.

There is also a pagoda, which follows the architecture of the main pagoda of Takht Bhai Temple, one of the best preserved temples in the Gandhara area, where Monk Marananta was born. Because of the way the architecture took on the shapes from India, the area has more of an exotic feel.

More information can be reached at www.bulgapsa.org but only in Korean.

Gulbi is by far one of Koreans' favorite fish to eat, and more well-known for being pricey.

There is a reason for Yeonggwang to be so famous for the fish, which was originally eaten by salting and drying out 50 percent of the fish's moisture. These days, drying is done a little more lightly (about 20 percent) to fit the changing tastes of the consumers.

For over 80 years from the King Mun era to King In of Goryeo Dynasty, the family of Lee Ja-gyeom enjoyed immense power for their ability to ward off outside forces.

Lee went to extremes to keep his power, by getting his two of his daughters to marry his grandson King In, a move that eventually prompted resentment of others, and even King In himself. Confrontations aggravated and when Lee's attempt to assassinate his grandson failed, he was exiled to Jeongju, which is now called Beopseongpo of Yeonggwang.

So how does this relate to gulbi?

During his banishment years in Yeonggwang, Lee came across yellow corvina that the region was already famous for. So enchanted by the taste, Lee sent them as a gift to King In but with a letter that read "Gul Bi," Chinese letters meaning he remains unmoved from his conviction, meaning the fish are not a bribe. While Lee's life ended in Yeonggwang, the scrumptious dried yellow corvina fish continued to be called gulbi.

Gulbi is eaten in diverse forms, by simply roasting it or even mixing it well with red pepper paste. They are salty and great with hot steamy white rice.

Yellow corvina fish are caught year round but those caught between March and April are the most popular.

For a snack, Yeonggwang recommends giant mosi (ramie in English) songpyeon (Korean traditional rice cake with bean stuffing). It is larger than average songpyeon and special in a way that the rice cake is made with ground ramie leaf that grows in abundance in Yeonggwang.

The ingredients for the healthy snack are ramie leaf, rice, pinch of sun-dried salt, and beans. There are about 60 mosi songpyeon houses in the area. One of them is Manna Ricecake House (061-351-1462) which delivers nationwide.

Perhaps what best represents Yeonggwang's pride and its effort to become a tourist attraction is the Baeksu Coastal Road that stretches 16.8 kilometers.

Alongside the road are streams of sweetbriers and camellia flowers, beyond which the overpowering West Sea stretches out.

Unlike most other beaches of the West Sea, here the black rocks make up the cliffs along the coast, somewhat similar to what one would witness on Jeju Island.

Drive along the road, and maybe even walk down the stairs closer to the sea. But no matter what you do here, do not miss the breathtaking sunset.

Sunsets are beautiful everywhere, but it is often never this blunt, as the sun smears orange across the sky, then out to the ocean, before making its vivid exit. Powerful waves hitting the pitch black rocks add to the drama.

Fully aware of the gasping beauty of the sunset here, Yeonggwang county has also built a brand new Evening Glow Pavilion that offers a great view from indoors, a small exhibition of sunsets around the world, and a 3D ride, popular among kids.

But the best recommendation? There is a humble local restaurant that sells Korean drinks, hwe (Korean sashimi), and other sea food menus, sitting right above the cliff and some 200 meters away from the pavilion.

Sit in the outdoor area of the restaurant, order the autumn favorite hickory shad hwe with some soju, and watch the sun go down. Nobody will be left discontented.