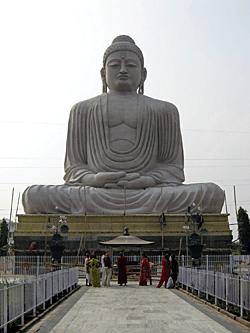 “The number of Myanmar pilgrims going on Bodhgaya tours has increased by about 50 percent,” U Maung Maung Aye said. “Before we depended on Air India flights to Kolkata but now Myanmar Airways International has added the Yangon-Gaya route to its schedule from October. This makes it easier for pilgrims to travel there.”

The Bodhgaya pilgrimage tour season is limited to September through April because the rest of the year is considered too hot for pilgrims, especially the elderly, to travel in comfort through India.

The direct flights have also reduced the cost of packages and given pilgrims more flexibility, U Maung Maung Aye said.

“This year we could introduce a new package priced at K450,000 a person. This covers flights between Yangon and Gaya and travel to a Theravada Buddhist monastery at Bodhgaya. The length of the trip is up to the pilgrims, they can stay as many days as their return ticket is valid for,” he said.

However, he said his company’s most popular package was a 15-day tour priced at K950,000 per person that includes other holy sites in India and Nepal.

U Maung Maung Myint, from Botahtaung township-based Migadarwon Pilgrimage Travel Company, said he was expecting at least double the number of clients to purchase Bodhgaya packages this season.

“Last year we sent about 70 pilgrims to Bodhgaya but this year we expect to send more pilgrims, about double,” said U Maung Maung Myint said.

Magadarwon offers 12- and 15-day trips departing every week over the September to April period, depending on demand. The company charges K850,000 for the 12-day trip and K950,000 for the longer package. The price includes air tickets, visa fees, food, accommodation in monasteries, air-conditioned bus transport and tour guide services.

Also popular are packages that combine pilgrimage sites with non-religious cultural attractions. U Khun Than Soe, from Nilar International Pilgrimage Company, said his company’s most requested package was an 18-day tour of India priced at K1.05 million that includes New Delhi, Kolkata and the Taj Mahal in Agra as well as the major sites in Bodhgaya.

The flights operate every Wednesday and Saturday, departing Yangon at 9am and arriving in Gaya at 10:30am local time, using a newly acquired Airbus A320 that can accommodate 162 passengers, according to MAI.