Feeling on top of the world

Lhasa, Tibet -- The low oxygen level and the freezing temperature are the first things I notice as I step out of warm terminal building at Lhasa's Gonggar airport fresh off the 8pm flight from Chendu. 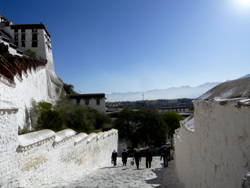 It's a 45kilometre drive to Tibet's capital city and once on the bus, I'm handed a round green can of pure oxygen, a musthave accessory for we "low elevation" folk unused to breathing the pure air found at an altitude of 3,500.

I've come to Lhasa on Tri Petch Isuzu sales' trip and am scheduled to meet up with the Methanee "Nino" Buranasiri's caravan to Mt Everest. But right now, I'm finding it hard to breathe.

"Why have we come? To torment ourselves?" asks a fellow participant as the bus rumbles into town.

These negative thoughts evaporate the next day as we wake in our comfortable hotel to bright sunshine, a clear blue sky and the spectacular mountainous scenery surrounding the city.

We're even more convinced that we've made the right decision to come here when we venture out and witness the locals practising their deep Buddhist beliefs.

Jokhang temple is our first stop and we queue alongside long lines of Tibetans in traditional dress waiting to get into the monastery area. Listed on the Unesco World Heritage Site since 2000 and part of Potala Palace, it's a spiritual destination for Tibetan Buddhist pilgrims from all over the world.

The centre of the pilgrims' attention in the 25,000squaremetre area is the Jowo Shakyamuni Buddha statue in the main hall, the single most venerated object in Tibetan Buddhism. There are also famous statues of various Bodhisattva, as well as King Songtsan Gambo and his two foreign brides  Princess Wen Cheng (niece of Emperor Taizong of Tang China) and Princess Bhrikuti of Nepal. The temple was built in the seventh century to celebrate the king's marriage to Princess Wen Cheng.

We're here during Buddhist Lent and the hall is packed. Pilgrims, who need to walk in a circle to pay respect to all the statues, are instructed not to stop for more than 10 seconds. When the gates close at 3pm, many are still left outside. They don't not go anywhere but drift over to join other devotees who have been praying outside. Young kids wait patiently with their parents while others sit on their bags and reach out to passing tourists for anything they can spare. The passersby seem particularly touched by the older pilgrims, most of whom are attired in handwoven clothes and clutching small pray wheels in their hands.

We move on and up towards the magnificent Potola Palace. Unlike the newer Norbulingka, the summer residence of Tibet's spiritual leaders that boasts more modern exteriors, the winter residence of Potala features traditional architecture. The palace has become a major landmark, as its white fa?ade can be spotted several kilometres away.

Standing at 117 metres in height and 360 meters in width, Potala Palace is the most important example of Tibetan architecture. It contains more than 1,000 rooms on 13 levels and houses portraits of the past Dalai Lamas and statues of the Buddha. While the outer White Palace serves as the administrative quarters, the inner Red Palace - or Potrang Marpo  houses the assembly hall of the Lamas, chapels, and shrines.

We're exhausted just at the thought of climbing the stairs to the top floor, where Dalai Lama once lived. Exploring the palace seems a tough challenge, especially given the daunting number of rooms, the 10,000 shrines and about 200,000 statues. Climbing Marpo Ri Hill is an ordeal too, but a must if you want to get to the heart of the Tibetan Buddhism. The site was used as a meditation retreat by King Songtsen, who built the first palace there in 637 for his bride. It became Potala Palace in 1645, in the reign of the fifth Dalai Lama, Lozang Gyatso.

I'm particularly impressed with the leader's monument, located on the first section of the stairs by the White Palace wall. Although not officially ascribed to anyone, this threemetre stone statue was built in tribute to the spiritual leader.

Water isn't allowed so visitors should carry candies in their pockets and leave bags in the cars. We stop many times before reaching Patrong Marpo and though still out of breath, the view makes it all worthwhile. From here, you can see the sprawling city area with the huge treeless mountains in the background. It's evident that Lhasa has changed enormously since opening its doors to tourists at the end of the 1990s.

But here in Patrong Marpo, time has stood still. Climb the narrow wood stairs to the galleries and you are in a forgotten world. While locals recite their prayers, visitors admire the thangka, the painted or embroidered Buddhist banners that hang everywhere.

Our guide takes us to see the tombs of the Dalai Lamas, which are encrusted with donated gemstones, and the Buddhist scriptures that line the chapel walls. The air is heavy with dust and incense and many visitors are soon choking for breath.

But the locals seemed oblivious to both the dust and the smell. In front of the chambers and chapels are a number of one yuan banknotes left by poor locals ready to give anything to show their faith.

It's thanks to this undying faith and sense of culture that Lhasa remains an attractive destination for the global traveller with a sense of adventure. Just take a deep breath.