Tibet is a place steeped in Buddhism and spirituality, but politics is never far behind.

Lhasa, Tibet (China) -- Tibetan Buddhism means everything in the high plateau of Tibet. Sometimes, the Tibetans say, the religion is bigger than politics and life. 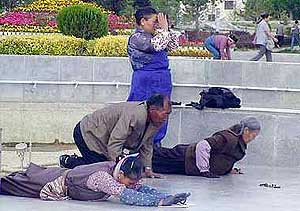 Almost every Tibetan incorporates religion into his daily life.

The Potala Palace, Jokhang Temple and Tashilhunpo Monastery are three of Tibet’s most important religious landmarks.

Potala Palace is the most famous of all. Located in Tibet’s capital of Lhasa, the 1,360-year-old, wooden and stone structure has survived a tumultuous past — from the Tibetan uprising against the Chinese in 1959 to the Cultural Revolution of 1966 when radical youths set about destroying artefacts deemed to be politically incorrect.

From afar, the palace perched on Marpori Hill looks imposing and oozes a mystical aura.

Most of the buildings in the palace are about 360 years old and were built by the fifth Dalai Lama. Only a few are from the era of King Songsten Gampo, who made Lhasa his administrative seat and residence in 637.

After the 1959 uprising, the palace was converted into a museum.

“More than 600,000 tourists visit the palace every year. There should be no more than 2,300 visitors daily,” says the palace’s administration department director Qiangba Gesang.

“We have to protect the cultural relics and scriptures in the palace and control the number of visitors because the palace is a very old structure and vulnerable.”

Hundreds of millions of yuan have been spent on renovations and to strengthen the palace’s weak foundation, he adds.

To witness locals performing prayers at the square in front of the palace is to understand how holy the palace is. The 117m-high palace is likened to a cluster of red and white buildings decked repeatedly, one layer after another. The scale of the place is astounding. The former winter palace of the Dalai Lamas has over 1,000 rooms, 10,000 shrines and 200,000 statues.

It houses Arya Lokeshvara, the most venerated statue in the palace, in the Phapka Lakhang chapel which dates back to the 7th century. Other relics found in the palace include tombs of eight previous Dalai Lamas (from the fifth to the 13th reincarnation, except for the sixth) in the form of stupas. 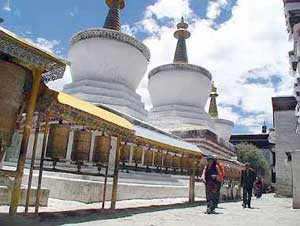 The tomb of the 13th Dalai Lama (1876-1933) is one of the highlights of the palace. Built in 1933, the giant stupa is made of priceless jewellery, a tonne of gold and offerings like elephant tusks, porcelain and vases.

Whether it is the unique construction or its cultural significance, the palace is bound to leave a profound impression on visitors. The granite walls, the wooden eaves and roofs, and the pillars decorated with scriptures showcase the finer aspects of ancient Tibetan art.

Another masterpiece in the main hall is a giant mural that documents the historical development of Tibetan Buddhism, the biography of the 5th Dalai Lama and the journey of Princess Wen Cheng of the Tang Dynasty to Tibet.

The actual size of Potala Palace remains a mystery even today. Qiangba says more rooms and relics are likely to be discovered by the cultural heritage department in future.

“We cannot tell for sure how many rooms there are in it. The experts say the topography of the area is very complicated and there has not been a map left behind by the builders,” he says.

Not far away from Potala Palace is Jokhang temple, considered by Tibetans to be the most sacred place for worship. The four-storey building with bronze tiled roofs decorated with golden deer statues and dharma wheels is a blend of Nepalese, Indian and Tang Dynasty architectural styles.

Unlike Potala Palace which served as residence for the lamas, Jokhang Temple is truly a place for worship.

There is a standard ritual for pilgrims to follow during their visit to the temple. First, they have to circumambulate the temple, then proceed to the main hall which houses the famous Gautama Buddha statue as well as the statues of Chenresig (God of Mercy in Tibetan), Padmasambhava and Songsten Gampo.

Because of its significance as Tibet’s top tourist attraction, the temple and the busy Barkhor Square where it is located were not spared of trouble during the infamous March 14, 2008 riots. On that day, rioters marched onto the streets near the temple and started setting fire to shops and looting banks and malls.

The riots, which targeted the Han Chinese and the Muslims, affected social order and tourism in Tibet. Jokhang was shut down for a few days until order was restored.

The temple, whose history stretches as far back as 647, houses 105 monks. It is said that the temple was built by Songsten Gampo when he married Princess Wen and Nepalese Princess Bhrituti, both of whom were Buddhists. The Budhha statue which Bhrituti brought along from Katmandu was placed prominently in the temple but later moved to Ramogia Temple. The one currently residing in Jokhang belonged to Wen.

Like the Potala, Jokhang also boasts several relics of great value. These include a Buddha statue said to be sculpted based on Gautama when he was 12.

While Potala Palace is no longer the Dalai Lama’s seat of government, Tashilhunpo Monastery built by the first Dalai Lama in 1447, remains the administrative seat of Panchen Lamas to this day.

Historically, the Dalai Lama reigned in Lhasa while the Panchen Lama took care of the Shigatse prefecture where the monastery is located. Shigatse, about four hours’ drive from Lhasa, is Tibet’s second largest city.

The monastery covers a huge area — 150,000sq m, to be precise. Among the attractions within are Maitreya Chapel with its 26.2m deity and the tomb of the 10th Panchen Lama, said to be the most costly mausoleum in all of China, what with its 614kg of gold, 868 precious stones and 246,000 jewels.

At the Time Wheel Palace, one can find ancient Tibetan classics as well as the statues of the founder of Tibetan Buddhism, Tsongkhapa and his disciples. More centuries-old literature on Panchens and Tsongkhapa are stored in the sutra publishing house.

According to the head of the monastery’s administration committee, Nian Zha, the 4th Panchen Lama made the monastery the residence of the successive Panchens from 1601.

“After that, the Panchen Lama sent his disciples to inland China to meet Emperor Shunzhi of the Qing Dynasty. Since then, Tibet has had close ties with the Chinese government, symbolising the unity between Tibetans and other ethnic groups in China,” he says.

Emperor Kangxi gave the 5th Panchen Lama a gold seal to affirm his status as Tibet’s spiritual leader, and since then, Panchens — from the 4th to the 11th — have been made the abbots of the monastery. The 11th Panchen Lama, 20, now lives and goes to a college in Beijing. He comes back to the monastery every year.

Despite the spiritual leader’s absence from the monastery, thousands of devotees still flock to the place every year. Their ritual includes walking around the three stupas next to the main building as they chant sutras. Carrying handheld prayer wheels, they spin prayer wheels at the stupas as they go along.

After that they proceed to the main chanting hall where the throne of the Panchen Lama and chapels of the Sakyamuni and Tara deities are located.

The monastery has the highest number of monks in Tibet — more than 900 reside here. Renovation works are currently underway on the gold roof of the stupa of the 4th Panchen Lama’s tomb.