by Janaka Alahapperuma, Report and photos by Thakshila, Onlanka News, May 17, 2011 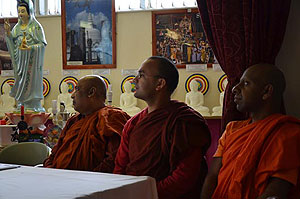 The day’s program started at 7.00 a.m. with observing of eight precepts until 6.00 p.m. The whole day program was conducted by resident monks headed by Ven Dr Witharandeniye Kassapa Nayaka thera (OBE), Chief Incumbent of the Birmingham Buddhist Maha Vihara and the President of the Midlands International Buddhist Association in the UK.

The program included Dhana, Seela and Bhavana as well as devotional songs sung by a group of nurses from Nottingham headed by Mr.Gihan Perera and Ms.Chamindri Mendis.

Local MPs, Councilors, community leaders and large number of devotees were present through out the day