Primorye, Russia -- Archeologists digging a site of the Jurchens epoch in Krasnopolye Settlement of the Primorye Territory have found remains of a Buddhist temple of the 13th century. 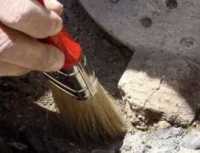 Earlier only temples of the Bohai epoch were discovered in Primorye Territory. The temple 30 square meters large has been found at a cape in the Partizanskaya River. Besides an earthen platform with traces of roof bearings archeologists have found some tiles, ceramics and fragments of a tripod a three-legged vessel for religious ceremonies.

Primorye Buddhists have already confirmed the fact that it is a Buddhist temple and performed a consecration ceremony.

Experts assume that the temple was exposed to fire, since they have found traces of burning-out. In particular, the roof tiles changed their original color. It could possibly happen during one of the attacks of some tribes hostile to Jurchens.
TOP