Ulan Ude, Russia -- For four generations, the Soviets waged war on Buddhists, sometimes branding them “Japanese spies.”  Now, 20 years after the collapse of communism, Buddhism is experiencing a massive revival in its historic areas. 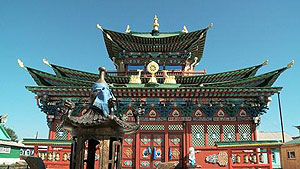 Yes, there are Russian Buddhists

The drums, the bells and the chants are redolent of Asia.  But the language spoken between the monks here near the shores of Lake Baikal is Russian.

Yondon Ulzutuev, who teaches philosophy at Ivolginsky datsan, Russia’s main Buddhist monastery, says that when he was studying Buddhism in India, people did not believe he was Russian.

The 25-year old is one of over a million people in post-Soviet Russia who are embracing the Buddhist faith of their ancestors.

Czarist Russia largely co-existed with the Tibetan Buddhist faith of the Mongolian peoples it conquered in Central Asia. But the Soviets waged war on Buddhism.  They bulldozed temples and monasteries.  They used ancient manuscripts to roll cigarettes.  They shot hundreds of priests - and sent the rest into the gulag.

The Soviets forced Buddhism underground.  But, they failed to eradicate the faith from its historic strongholds - the border republics of Kalmykia, Tuva, and here in Buryatia.

Although more Russians are Buddhists today than before the revolution, the Kremlin rejects their central demand.

They want their highest spiritual leader, Tibet’s Dalai Lama, to come to Russia and consecrate new temples and monasteries, but Moscow has refused to give the Dalai Lama a visa since his last visit in 2004.

The nun says now that the Dalai Lama has given up his political role as leader of Tibetan exiles, Russia should give him a visa.

But China is now Russia’s largest single trading partner.  Chinese officials have warned that the Kremlin has a clear choice: the 1.3 million followers of the Dalai Lama or 1.3 billion Chinese.

At a neighborhood temple, Buddhist practitioner Irina is praying for her unborn child. After spinning the prayer wheels, Irina explains that she comes to the temple to pray that her pregnancy and baby’s birth will go well.

And, judging by the large number of pregnant women coming to temples to perform rituals and to receive blessings, time seems to be on the side of Buddhism, here in Russia’s Asian corner.