ELISTA, Kalmykia (Russia) -- Buddhists in Russia's Kalmykia region have asked the Foreign Ministry to allow the Dalai Lama to visit the country, a representative of a Kalmyk central temple said. 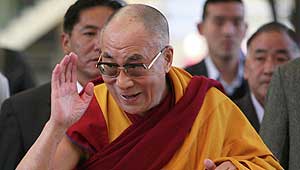 Russia has consistently refused to allow the Dalai Lama to visit.

Kalmykia, on the Caspian north coast, is European Russia's only Buddhist-dominated region.

Earlier this year the Dalai Lama announced his retirement as Tibetan political leader and said he would hand power to an elected successor.

The Dalai Lama, who fled Tibet in 1959, has repeatedly said he seeks autonomy for Tibet rather than independence from China.

Beijing accused the Nobel Peace Prize winner of orchestrating the March 2008 unrest in Tibet, which left 19 people dead and 623 injured, according to official Chinese reports. The Dalai Lama has denied the allegations.