Chita, Buryatia (Russia) -- Buddhists in Buryatia and the Baikal Territory waved goodbye to the Year of the White Hare and welcomed the Year of the Black Dragon. A day earlier head of the Buddhist Traditional Sangha of Russia Pandito Khambo Lama Damba Ayusheyev congratulated Buddhists on the holiday. 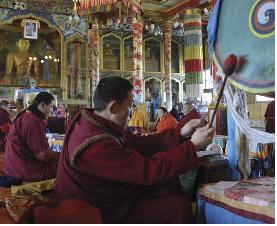 "The new year of the Black Dragon will not be easy for all of us because of the events occurring worldwide. I am therefore wishing you to have patience, optimism, wisdom and health. Remember what the great Buddha said: a human life has the greatest value. Take care of one another," he said in his congratulatory letter.

The word 'sagaalha' [Sagaalgan] derives from 'saga alhaha,' which means to step over the time, to get over it, because time is directly linked to Erleg Khan, the Lord of Death, the Supreme Lama of Russia also recalled. "During the celebration of the Sagaalha it is more important to prepare for the future passage through the Year of Black Dragon," he said.

In the early hours of Wednesday, lamas at datsans (Buddhist monasteries) read mantras to the Goddess Baldan Lhamo. Buddhists believe that on the first night of Sagaalgan (the lunar new year) one should rise early because at 5 a.m. Baldan Lhama visits her dominions and gives particular blessing to those who are awake.

A day before the celebration, Buddhist lamas held a holy ritual, Dugzhuba, suppressing 64 evil forces. Under the sound of timpani and drums, they lit ritual fires and prayed that all the woes that befell people in the past year would be destroyed by the fire.