Aldershot, UK -- Aldershot's new Buddhist centre is almost complete, after a refurbishment was carried out ahead of its grand opening. 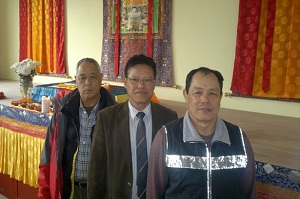 Plans by Buddhist Community Centre UK (BCCUK) to turn the former BT social club building, accessed from Ordnance Road, into a place for Buddhist worship, ceremonies and community activities were approved in July.

Refurbishment work costing more than £500,000 has followed, with only the finishing touches of Buddha statues and decorative items, such as prayer reels, left to add.

The centre was originally due to be finished earlier this year, but disruption caused by the stormy weather delayed the work.

It is now expected to be opened early in the summer, with a visit by His Holiness the Dalai Lama scheduled for October.

BCCUK public relations officer Major (retired) Damar Ghale MBE has stressed from the outset that the centre will be open to people of all faiths.

Asked whether he felt that would be a reality, he said: “Yes, I think so. The indigenous British public can also come and do the meditation.

"We will, in time, do the services in English. The whole idea is we respect each other.

“This is for everybody. Everybody can become a member or a trustee, regardless of religion or nationality.”

Just over 400 members of the community pledged a minimum £1,000 to become trustees, which paid for work such as adding a kitchen, toilets, a store room, seating for the public and accommodation for two monks, who will be sponsored to travel over from Nepal.

Once the necessary health and safety certificates are obtained for the centre, it will be open for any members of the community to visit to pray, meditate and enjoy refreshments.

It may also host marriage and funeral services and a health clinic, but will not be available to book for events such as parties.

The opening hours, centre management and appointment of committee members will be dealt with once the centre has opened.

Independent community worker Rich Cooper, who has worked on projects such as the United Rushmoor football team, aimed at uniting Rushmoor’s diverse community, said he was looking forward to getting to know the monks at the centre in order to work together for the community.

He felt non-Nepalese members of the public would take up the invitation to visit the centre.

Mr Cooper said: “There’s a growing Buddhist community in Aldershot. In recent years that’s been viewed as a negative due to the way it’s been handled and any support for this community has often been viewed negatively.

"But I don’t think it’s a case of us and them, it’s a case of finding common ground. Regardless of what faith you are from, I think people are really quite spiritually hungry.”