Vesak Celebrations at the Buddhist Vihara in Berlin - Frohnau 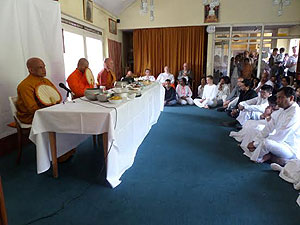 As a tribute to Mr. Walther Schmits (1884-1957), who was a generous sponsor of the Berlin Buddhist Vihara (Das Buddhistische Haus), a framed picture of him was unveiled by the Ambassador of Sri Lanka and the Secretary of the German Dharmaduta Society (GDS ). One of his relatives Mr. Thomas Kemmann presented to the GDS on behalf of the Frowein family of Wuppertal, Germany a collection of poems that Walther Schmits had written during his lifetime under the title ' An meine Freunde' ( To My Friends).

In his speech, His Excellency Mr. Karunatilaka Amunugama emphasized: “Through Buddhism you learn to live in peace and harmony. The Buddha wants his devotees to spread Buddhism.”

Mr. Senaka Weeraratna, Secretary of the German Dharmaduta Society, delivered a brief talk on the ' Legacy of Walther Schmits' .

Mr. Tobias Siesmayer thanked the members and friends of the Berlin Buddhist Vihara Friends’ Association (Förderverein Buddhistisches Haus) for their support. So the roof of the main building has now been fully renewed and other areas of the temple grounds, such as the festival ground, the gardens, and parts of the fence, could be refurbished well. He expressed his gratitude particularly to Prof. Monika Grütters, Member of the German Parliament and Minister of State for Culture and Media, Dr. Thomas Schmidt of the Berlin Monument Authority as well as District Mayor Mr. Frank Balzer and City Construction Council Mr. Martin Lambert (both with the German Christian Democratic Party).

Mr. Tissa Weeraratna, caretaker of the Berlin Vihara, speaking gave an outline of the current programs being carried out at the Temple and the future plans.

Over 250 people including Sri Lankans, Germans, Thais, Cambodians and the like attended the Vesak day celebrations at the Berlin Vihara. The lunch at the Dansala located in the large garden of the Temple was provided by the Sinhala Society of Berlin.

Europe’s first and hence the oldest Buddhist center was built in 1924 in (Berlin) Frohnau by the physician Dr. Paul Dahlke (1865-1928). Dr. Dahlke, who had studied the Buddha’s teachings for nearly three decades, has thus created a place i.e. Das Buddhistische Haus, for facilitating meditation and the teachings of the Buddha.

In 1952, Asoka Weeraratna founded the German Dharmaduta Society, followed by the purchase of Das Buddhistische Haus from Dahlke’s heirs 29 years after his death (1957) and converting it into the first Buddhist Vihara in Germany and continental Europe by stationing resident monks for extended periods of time. Since that time, monks from all over the world but mainly from Sri Lanka have been spending time on both a short and long term footing in this Buddhist Vihara in Berlin - Frohnau.

In 2000, Asoka Weeraratna’s nephew, Mr. Tissa Weeraratna, took over the reins as caretaker of the temple. Since 2006, the Berlin Buddhist Vihara has also been supported by the non-profit “Buddhistisches Haus Förderverein e.V.” Friends’ Association.