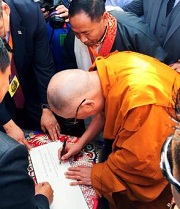 The demonstrators, who are Shugden Buddhists, chanted: "Dalai Lama stop lying" as the religious leader arrived to open the new centre in Aldershot, Hampshire.

The protest, claiming that the Dalai Lama has suppressed their form of Buddhism, was met by a colourful counter demonstration by supporters of the exiled Tibetan leader.

The Dalai Lama performed a blessing for the inauguration of the centre, which includes a Buddhist monastery, of which he is the patron.

Laughing off the protests, the Dalai Lama said that he had turned away from the Shugden form of Buddhism because it had denied him "religious freedom".

A spokesman for the International Shugden Community said: "Throughout the exile communities worldwide, Tibetans have been forced to make public declarations that they would neither engage in the practice of their religion nor associate with anyone who does.

"This has divided families, broken marriages, such that parents cannot see their children and lifelong friends ignore each other in the streets. The human cost of the Dalai Lama's actions are devastating."

The Dalai Lama also made an indirect reference to the massacre in Tunisia, calling for an end to religious division.

He said: "Killing in the name of religion is totally wrong. We have now the serious responsibility to preserve our traditions, religious harmony, and take the further step to further promote religious harmony."

The Buddhist Community Centre has been located in Aldershot, which has strong links with the Gurkhas - and the local borough has been identified as having the largest population of Buddhists in the UK.

Damar Ghale, spokesman for the Buddhist Community Centre UK, said: "We are deeply honoured to welcome the Tibetan spiritual leader His Holiness the Dalai Lama, who is much loved by the British people, to Aldershot.

"There is a large Nepalese community in Aldershot and they share the Tibetan and Himalayan people's reverence for His Holiness the Dalai Lama.

"Increasingly, people across the UK are becoming more interested in Buddhism. Our centre in Aldershot has strengthened our sense of community and brought people together whatever their background and culture - just as HH the Dalai Lama brings people across the globe together with his message of peace and tolerance, and oneness of humanity."

The Dalai Lama's visit follows his tour of Glastonbury Festival yesterday - which included the singer Patti Smith giving him a hug as she presented him with a cake on the Pyramid stage while the crowd sang happy birthday to him as he celebrates his 80th birthday on July 6.

After visiting the new community centre, the Dalai Lama gave a public talk - Buddhism in the 21st Century - at Aldershot's football stadium.