Paris, France -- A Portuguese actor says he was detained on suspicion of terrorism after meditating and chanting Buddhist texts aboard a plane at Paris Orly airport. 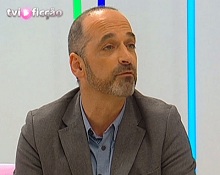 Heitor Lourenco, 47, says he was reciting texts in Tibetan from his smartphone screen on the Lisbon-bound Transavia plane when police ordered everybody off the plane and led him away for questioning.

Police said to him that a neighbouring passenger thought he was reading aloud texts that included the words "death" and "bombs," he told Portuguese media late Thursday.

The screen also had a clock that timed the length of the meditation. The passenger next to him thought the clock was a bomb timer, Lourenco said.

Airline spokeswoman Delphine Sacleux confirmed that another passenger had alerted the cabin crew of Lourenco's "suspicious attitude in prayer."

She said the crew followed standard procedures "given the current climate."

Police then intervened, and determined that there was no problem and all the passengers — including Lourenco — took a flight for Lisbon the next morning.

Lourenco, who has appeared in Portuguese soap operas and comedy sketch shows, said he was released after showing police some online clips of his acting and his Wikipedia page that says he is a Buddhist.

French authorities have put the country on its highest level of alert for terrorism following deadly shooting attacks in and near Paris in January and the beheading of a French businessman last week in southeastern France.