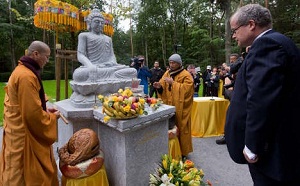 << The blessing of the graveyard on Sunday. Photo: DPA

The burial ground is long overdue, Ding Linger, a spokesperson for the Vietnamese Buddhist Centre in Dresden told The Local.

"It's been needed for 40 years since Vietnamese people first came to East Germany," he said.

Vietnamese are the largest immigrant population in east Germany, making up 100,000 of the population. Of those, 7,000 live in Dresden, reports the Hamburger Morgenpost.

With around 85 percent of the Vietnamese population identifying as Buddhist or 'affiliated to Buddhism,' the demand for burial spots in the graveyard is likely to be high.

But religious oppression under communism and the extremely difficult circumstances faced by Vietnamese after the fall of the Berlin Wall meant people's priorities lay elsewhere.

Linger, who also goes by the Buddhist appellation Khahn Tri, explains that when communism collapsed as a belief system, Vietnamese people again started to look back into their own heritage for answers to fundamental questions.

"They needed new answers to question such as 'Who am I? What do I do at birth, and at death?'" Tri explains.

But getting permission for the burial ground was a four-year struggle hindered by the fact that Buddhism is still not granted the same state recognition as Judaism, Catholicism or Evangelical Christianity in Germany.

Linger also points out that the graveyard is not just for Vietnamese - anyone who identifies as Buddhist regardless of their ethnicity or what religious school they adhere to can be buried there.

"At last with this graveyard the Buddhist community here has a 'last' solution, so to speak," said Linger.

The 2,000-square-metre burial ground is replete with Buddhist imagery.

Its focal point is a ten-tonne granite statue of Buddha which stands at the centre of an eight-spoked wheel – a symbol of learning and renewal in Buddhism.

But one crucial symbol of the religion is nowhere to be seen.

"When you visit Buddhist burial grounds in Asia, you see swastikas everywhere," Linger says. "It is an ancient symbol of rebirth in the Eastern world that long predates Buddhism."

But Buddhism teaches us to avoid extremes and seek balance in life. For this reason, we decided not have swastikas in our burial ground."

Linger explains that the Nazis appropriated the image because they saw the roots of their supposed Aryan supremacy in the symbol, although the Buddhist symbol is actually the mirror image of the Nazi one as the hooks face anti-clockwise.

"We wanted to avoid misunderstandings. In Europe there is widespread ignorance about the Eastern meaning of the symbol," he explained.

"We also wanted to avoid the burial ground becoming a meeting pointed for the far right," he adds, pointing out that Dresden is the homeland of Pegida, a xenophobic protest movement which has organized anti-immigrant marches across Germany over the past year.

For the Dresdener Buddhists, the burial ground is a vital sign of religious tolerance which they hope will stand against the negative reputation the city has recently acquired.

"Having a Wilkommenskultur [welcoming culture] is all well and good," Linger says. "But politicians will only succeed in integrating immigrants when they accept their religious traditions and ceremonies."