Doncaster, UK -- As the sun rises each morning a group of Buddhists gather to clear their minds and meditate at a unique place of worship on a remote island. 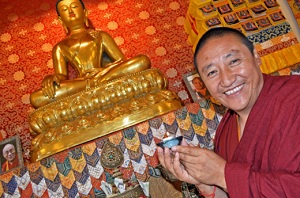 You could be forgiven for thinking this serene scene is in some far off exotic land in the Far East.

But far from it - we are actually in a former farmhouse on the outskirts of Doncaster.

While the centre may have kept a relatively low profile, it has actually been open since 2009.

It is set in 180 acres of beautiful countryside on what has historically been known as the Lindholme Island - a raised sand and gravel bank within the borders of the Thorne and Hatfield Moors.

Clearly, the charity leaders could not have found a more apt place for their Buddhist retreat. Indeed, the charity’s spiritual director Chokyi Nyima Rinpoche said of the site: “Many will achieve realisation here.”

Every day people gather ahead of the morning rush for an hour’s meditation, there are teachings from visiting monks and nuns from all over the world and there are regular multi-faith events for all the community to join in.

Charity founder and Buddhist David Benjamin, aged 64, lives at the centre with his wife Paulette and said they get visitors from all walks of life.

“From factory workers and people who run their own businesses to unemployed people and those who are retired. There are a wide range of ages too, our youngest member is 14 and our oldest visitors are in their 80s.”

On most weeks the centre welcomes several monks and nuns who give Buddhist teachings, while lay practitioner Buddhists visit from across the globe, including Europe, America and Asia. Visitors are also welcome to stay as there are 12 sleeping rooms and other accommodation areas for up to 60 people.

Said David: “We have people staying for one night, a full week or even longer. Anyone with an interest in finding out more about Buddhism is welcome. There are core teachings of Buddha which are essentially to not harm others, to help others and to tame your mind - this is to do with taming negative thoughts. So for example if you hold onto hate for another you are not harming them, just yourself. It all basically boils down to just being nice to others.”

David’s own path to spiritual awakening took a few unusual twist and turns.

He said: “I was on holiday in Kathmandu, Nepal, about 20 years ago and I became interested in Buddhism. It just made a lot of sense to me.”

His spiritual journey took him away from his life as a housing developer in Colorado, America, and he stayed for a while at a Buddhist centre in Denmark. It was there that he and two other founders, David’s wife Paulette and a friend called Marysia Zielke, along with spiritualist director Chokyi Nyima Rinpoche, came up with the idea for a UK centre.

He said: “The Doncaster site was chosen because it is central and also the beautiful surroundings help to put you in the right frame of mind.”

After several years, the popularity of the centre is undoubtedly growing. In July the charity gained planning permission for an extension, including 36 sleeping rooms and an information centre. They also have outline permission to build a temple for up to 250 people and will be submitting more detailed plans to the council later this year.

Said David: “I think with how fast-paced life is people see Buddhism as a place where they can slow down and take a breath. That is what our retreat offers.”

The centre is keen to invite people in and a recent village fete - complete with vintage tractors and a tug-of-war - attracted a00 visitors. People from all different faiths including Buddhism, Christianity, Islam and Sikh are taking part in a 24-hour relay sponsored walk around the estate for charity on August 27 and 28.