Berlin, Germany -- The Berlin Buddhist Vihara founded by Asoka Weeraratna (1957), and housed in Das Buddhistische Haus built by Dr. Paul Dahlke in 1924, being the oldest Theravada Buddhist temple in Europe, observed Vesak on Sunday May 14, in the presence of a large gathering of Buddhists and well – wishers from Sri Lanka, Germany, Thailand, and several other Asian and European countries. 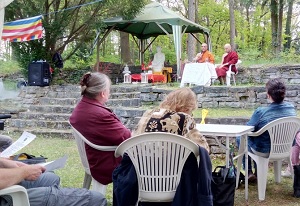 Two Buddhist monks namely Ven. Bambalapitiye Medhankara Thero of Siri Vajiraramaya Temple in Bambapalapitiye, Colombo and Ven. Dhammamuninda Thera ( an Italian monk trained at the Mitirigala Nissarana Vanaya) led the religious activities in the Vesak Day programme which was organised and co – ordinated by Mr. Tissa Weeraratna, with the assistance of both Sinhala and German Buddhists.

Following the Dhamma talks by the two monks and address of welcome by the hosts, Pirith was chanted to invoke the blessings of the noble triple gem on all those present  and all living beings in accordance with the teachings of the Buddha who placed a heavy emphasis on Ahimsa (non - violence), Metta (loving - kindness) and Karuna (compassion) as the cornerstone and true pathway to peace. Several dayakayas observed ' Sil' on this occasion.

Berlin Vihara was decorated with Buddhist flags, and colourful Vesak lanterns. A number of Tents erected on the large compound of the Vihara served as Dansala that offered a wholesome vegetarian meal carrying mostly Sri Lankan dishes during the lunch recess.
TOP