Monks ordained on a barge at Runcorn Buddhist temple

Runcorn, UK -- It was an unusual occasion for worshippers at Wat Phra Singh Buddhist temple as they celebrated the centre’s first ordination ceremony. 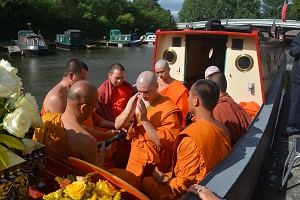 << Monks ordained on a barge at Runcorn Buddhist temple

On Saturday the event at the Runcorn site began with the symbolic hair cutting and the new monks getting their full set of robes.

The ordination was held the next day near the High Street temple and unusually it took place on a barge moored on the Bridgewater Canal.

The ceremony saw one monk and two novices formally accepted by seniors from the monastery.

Supporters also joined the celebrations and the organisation hopes to hold further services in the future.
TOP