London, UK -- Apa khabar? (How are you?) and Malaysia Boleh! (Malaysia Can!) may sound familiar when Malaysians greet each other or get caught up in a nationalistic fervour. 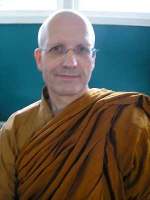 But the expressions certainly evoked a pleasant surprise when they came from none other than a senior bhikkhu (monk) of Britain’s largest Theravada Buddhist monastery.

Then again, Venerable Ajahn Vajiro is not just another Western monk; he was born in Malaysia and sometimes regards himself as more Asian than European.

Indeed, the 52-year-old bhikkhu feels that some of the temple’s Malaysian devotees born in Britain are “even more English than me”.

“I was born in a hospital in Bangsar (in Kuala Lumpur),” he said matter-of-factly, in an apparent reference to his maternal French grandmother and her English husband.

“But I sudah lupa banyak lah (But I’ve forgotten much of it),” he continued humbly although he could still speak a smattering of Bahasa Malaysia.

Interestingly, both Vajiro and temple abbot Venerable Ajahn Sumedho of the Amaravati Buddhist Monastery in Hertfordshire, 48km northwest of London, have that uncanny Malaysian connection. The abbot spent two years in Malaysia before moving on to Thailand where he lived in the forest monasteries of renowned meditation master Venerable Ajahn Chah for 10 years.

Vajiro, who always felt at home whenever he visited Malaysia, said Kuala Lumpur had changed a lot compared to the 1960s. “The tallest building then was 11 storeys high,” he said, adding that he liked the country and its multi-culturalism.

A vegetarian who loved durians, Vajiro’s face lit up when asked about his favourite Malaysian food, as his mind raced back to the exotic fare, prompting him to remark: “One can hardly get gula melaka in England.”

He said he did not encourage people to make profit from dealing in meat and animals, which he described as a wrong form of livelihood. He admitted, though, that “I used to like satay”. 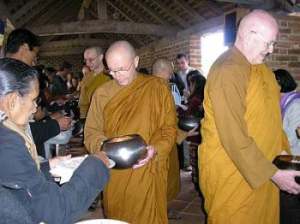 Vajiro also spoke of his admiration for Venerable Dhammananda in the Brickfields Buddhist Vihara and other temples in Malaysia.

“I haven’t been to Malaysia very often. However, I very much appreciate the good work done there,” he said.

At present the only Malaysian-born bhikkhu among the monastery’s Sangha community, Vajiro was selected to receive the royal kathina robe during their Kathina celebrations last Sunday. Vajiro said he considered it a great honour to be presented with the robe by Thai Ambassador to Britain Vikrom Koompairot, on behalf of King Bhumipon of Thailand.

The ceremony was the highlight of the celebrations, which began with Sumedho and Vajiro leading two groups of monks, nuns and novices to receive alms food offerings from devotees who lined up around the temple compound.

After the dana offerings and sharing in the meals, the kathina cloth was taken around the stupa in a procession. This was followed by the taking of the three refuge and five precepts by the lay community as well as paritta chanting by the sangha community.

Having evolved over the centuries, the kathina tradition is now a celebration in which the lay community offers the cloth to the sangha after the rains retreat (vassa).

The temple ground was a hive of activity as a handful of Malaysians joined the majority of Sri Lankan and Thai communities in the day-long celebrations.  Among them was Malaysian IT software consultant Sharon Chan, who has taken part in the temple’s kathina celebrations every year since 2000.

“It’s a very heart-warming and meaningful event,” said the Penangite, who also helped out in the kitchen and other chores.

Chan, who attends meditation classes and dhamma talks at the monastery, described the place as calm and the resident community friendly.

Joan Ong Corey, also from Penang, was spotted with her two children, Faye, nearly three years old, and Luke, eight months. “Both of them generally behave well in the temple,” she said, adding that she finds peace and quiet in the surroundings.

Restaurant chef Low Tian How said the monastery was the perfect setting for meditation and learning of Buddhism. “It’s so serene here,” said Low from Klang, who came to the UK five years ago.

Set in the tranquil countryside amidst rolling hills and lush greenery, the 10ha monastery was founded in 1984 by Sumedho.  Amaravati, which means “Deathless Realm” in Pali, is a centre of teaching and practice for people in monastic or lay life.

The monastery’s activities include regular meditation classes, dhamma talks and meditation retreats. The monastery also houses a library, meeting hall and separate retreat area. Above all, the centre holds a special place in the heart of the Buddhist community, who come from far and near to be inspired by Buddha’s teachings.