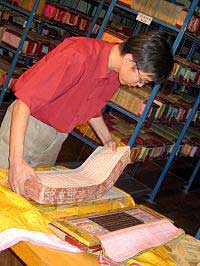 As an archivist at the Buryat Academy of Sciences, Tsyrempilov is busy cataloging the priceless texts, which were seized during the destruction of Buryatia's Buddhist monasteries in 1937 and were once meant for a Soviet museum of atheism.

But the young Buryat scholar is also busy with another cultural-preservation campaign, one that opposes President Vladimir Putin's plan to merge dozens of regions, national republics and autonomous districts -- including those in Tsyrempilov's Lake Baikal neighborhood.

On Friday, Putin met with Irkutsk region Governor Alexander Tishanin in the Kremlin to discuss the latest regional merger initiative: joining the Irkutsk region with the Ust-Ordynsky Buryatsky autonomous district.

The Kremlin wants to increase its hold over the far-flung regions by reducing their number from 89 to as few as 30 through mergers. Since 2003, three such initiatives have been approved in local referendums. A referendum on the Irkutsk merger is planned for April.

"The main goal from the Kremlin's point of view is to make the regions easier to govern," said Nikolai Petrov, an analyst at the Carnegie Moscow Center.

But Tsyrempilov and other activists among Russia's ethnic minorities fear that the restructuring will rob them of their language and traditions -- and lead to precisely the regional instability it is meant to prevent.

"Since 1937, when Stalin redrew the map to destroy what was then a unified Buryat-Mongol republic, the question of cultural, political and regional unity has always been the main one for us," said Vladimir Khamutayev, head of the Buryat cultural organization Negedel, or Unity. "But speaking out for the rights of national minorities in Russia today is a conversation with the deaf."

Ust-Orda, as it is usually called, is one of the three Buryat regions that Stalin carved out of the formerly unified republic. Today, the district is home to about 15 percent of Russia's 400,000 ethnic Buryats, though the majority of its population is ethnic Russian.

The district is also in economic shambles. Tishanin told Putin on Friday that 80 percent of Ust-Orda's population lives below the poverty line, compared to 20 percent in the Irkutsk region, RIA-Novosti reported.

Merger advocates claim that joining the two would improve the situation dramatically.

While announcing the official start to the unification process on Oct. 11, Ust-Orda administration head Valery Maleyev said the merger would "balance the socio-economic level of the two regions, preserve and elevate living standards." At the same news conference, Tishanin said the new federal subject would have "an effective administrative system and a competitive economy based on both regions' strategic advantages."

Their rhetoric echoed that of Putin himself, who has said regional enlargement would bring administrative and economic benefits across the board.

"Federation members do not merge for the sake of unification itself, but to make their management more efficient and their social and economic policies more effective, which will ultimately lead to increased social prosperity," Putin said in his state of the nation address in April.

While it is not clear what economic benefits the Irkutsk region would reap from joining with its poorer neighbor, the merger would clearly save the federal center some money. Ust-Orda's 2005 budget includes about 1.5 billion rubles ($52 million) of federal subsidies -- a burden that would largely shift to Irkutsk after the merger.

But Buryat activists are doubtful that the lives of Ust-Orda's citizens would improve significantly -- and they fear the merger process would further erode Buryat cultural heritage.

Yevgeny Khamaganov, administrator of the web site Buryatia.org, said he was unconvinced by assurances from Tishanin that Ust-Orda's Buryats would be able to preserve their culture after the merger. The only guarantee of that is "the ability to influence organs of local self-rule, which only the regional authorities can do," he said in e-mailed comments.

Khamaganov noted that various Buryat cultural organizations were already active in the Irkutsk region. "But they can hardly be said to do enough ... to preserve and develop the Buryat language and culture," he said.

Activists also say the pressure to assimilate into mainstream Russian culture will increase as Buryats go from being 25 percent of Ust-Orda's population to less than 5 percent of a post-merger Irkutsk.

The Regional Union of Young Scholars, an activist group headed by Tsyrempilov, made its case against mergers to Putin in an open letter earlier this year. "Ensuring the preservation of the Buryat language and culture without autonomy from the federal government is practically impossible," the letter said.

The letter bore 2,000 signatures from citizens under the age of 40 -- mostly Buryats, but ethnic Russians as well. And it did not stop at opposition to the Irkutsk merger; it proposed the reformation of a unified Buryat republic along the pre-1937 borders.

The presidential administration has yet to respond.

While the Kremlin's ultimate plan for Russia's regional borders remains unclear, Tsyrempilov pointed to signs that the Baikal-area mergers were not likely to stop with an enlarged Irkutsk region.

In interviews earlier this year, Buryat President Leonid Potapov proposed the creation of a greater Baikal region that would include Irkutsk, Buryatia, Chita, Ust-Orda and the Aginsk Buryatsky autonomous district.

"It's quite a contradiction -- a leader advocating the destruction of his own republic," Tsyrempilov said. "Everyone knows that Ust-Orda is only the first step."

A representative of the Buryat presidential administration denied the question was under active consideration. The possibility of merging Buryatia with other regions "is not being discussed on an official level," said first deputy administration head Nikolai Antonov in a faxed statement.

None of the mergers has yet been finalized. But the case of Irkutsk and Ust-Orda shows the Kremlin's ability to get the ball rolling when it wants to.

Discussions between Irkutsk and Ust-Orda began in 2002 and stalled several times. Then, earlier this year, Putin used his most dramatic recent expansion of executive authority -- the ability to appoint regional governors -- to change the scene. The president named Tishanin, a little-known railroad magnate, as the new head of the Irkutsk region in August. On the very day Tishanin was approved by Irkutsk's regional parliament, he made a speech promising that the merger would be decided by the middle of 2006, then headed to Ust-Orda for talks on the matter.

"Everything is a matter of time," said Dorzh Tsybikdorzhiyev, a member of the Buryat National Congress, which seeks to create a unified voice for Buryats from various regions. "If you can keep people calm for six months, anything can happen. And with the authorities imposing a virtual blockade on public criticism, it is virtually impossible to create a real public debate."

Khamutayev, who is also a member of the Buryat National Congress, said the federal center ignored the opinions of national minorities at its own risk.

"This is one of the lessons of Chechnya," Khamutayev said. "Putin's attempts to assimilate national minorities will fail just as Soviet attempts did."

Padzhana Dugarova, a Buryat colleague of Tsyrempilov's, said the merger excluded her interests just as the current definition of what it meant to be Russian excluded Buryats as a whole.

"I would like to be Russian if that meant being part of this country in all its variety -- if our right to preserve our culture and language were guaranteed," Dugarova said. "But there is no such guarantee. I don't feel this government wants to see me as a citizen."