Oswiecim, Poland  -- It sounds like the set-up for a politically incorrect joke: Did you hear the one about the journalist who began his journey in the Buddha’s footsteps in Poland? 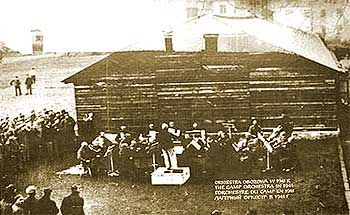 <<  The ensemble depicted here played on orders of their S.S. overseers. New arrivals and those who marched out daily to work at Buna and elsewhere served as audience (Source: http://www.remember.org/
educate/partiv.html)

The Buddha (“the awakened one”) never stepped foot west of what is now India. I was on assignment for National Geographic Magazine, supposedly tracing Buddhism’s history. But what was I doing in Oswiecim, in the southwest corner of Poland?

It might make more sense knowing the German name by which Oswiecim is better recognized: Auschwitz. If the connection is still not evident, consider the first of Buddhism’s so-called Four Noble Truths — that the human condition is rife with suffering. Then where better (or worse, as the case may be) to stare into the face of horrific suffering of a magnitude that numbs the heart and paralyzes the brain? Where better, hopefully, to come to terms with it?

I had joined up with a Buddhist group that conducts annual Bearing Witness retreats at the Auschwitz-Birkenau concentration and death camps, now a memorial museum, as a way to gain a deeper understanding of suffering and one’s own reaction to it.

My worst nightmare was that just seeing the wooden watch towers, the barbed-wire fences and the sadly iconic brick gateway would cause me unbearable suffering. I feared sitting cross-legged on those infamous train tracks, silently meditating in the Soto Zen Buddhist tradition under a polluted, monotonic gray sky.

The nightmare was realized, and then some. But another “truth” slapped me harder in the face: the truth of my Polish heritage (my mother’s parents were born in Poland). Being a Polish American was not something one boasted about when I was growing up. For most of my youth I thought “dumb Pollack” was one word. It’s a fact of my life I rarely acknowledge, but here there was nowhere to hide.

It hit hardest in a large chamber the Nazis called the Sauna, where prisoners were disinfected. Now the concrete flooring is covered with highly reflective tinted glass. Several exhibit walls display salvaged pictures: sepia tones of families whose prominent noses and high cheekbones reminded me of my own relatives.

We gathered in a semicircle on the glass floor and sat facing a wall of such photos. We were each handed a different page with a list of names and simultaneously we read from our list.

“Israelevitch, Abraham. Israels, Salomon. Issakowitsch, Alexandre....” I naturally fell into a familiar Hebraic rhythm of incantation. One name overlapping the next, one voice harmonizing with another, all bouncing off the empty walls, a chorus of death.

A bell rang and we sat in silence, but the names still echoed in my ears. In the Soto tradition, you sit with eyes open, faced down. My stare landed on a reflected photo of a fair-haired woman in her 20s, clutching her two children. In her 20s, my mother, too, was a blonde beauty with a strong jaw and a distinctive nose, a Meryl Streep look-alike from the film of William Styron’s “Sophie’s Choice.” Suddenly it dawned on me: we bear witness not only to those who died here but also to those who never got to live, the unborn children and those children’s unborn children. History may have lost undiscovered medical cures, unwritten novels and unscored musical masterpieces, but I lost experiences, love, wisdom passed from generation to generation. I had no memories upon which to reflect.

Rather than get angrier or go numb, this time I felt an inexplicable release from it all. I had reached that path to forgiveness only when, in meditation, I was able to separate “me” from me. By staying focused on this moment, I could separate two experiences: what happened here and my reaction to what happened here. By simply bearing witness, without layering it with my feelings, my opinion, my reaction, my judgment, I saw that the Holocaust just happened. No blame. No sadness. No guilt. No anger.

That evening I told others on the retreat about my liberation from so many hellish thoughts and feelings. I was surprised but relieved that some nodded in agreement.

“I feel more alive here than anywhere else,” confided Aleksandra, a 24-year-old photography student from Wroclaw, Poland. This was her second Bearing Witness retreat, she told me.

“How could you feel more alive?” I asked, incredulous. “Surrounded by death at every step? How could that be?”

And she left it at that.

This answer perplexed and frustrated me. Was this a cop-out? Or was she practicing what Buddhists call the “don’t-know mind” — that there are things we can never understand, that make sense only when we stop trying to understand them.

I don’t know about the don’t-know mind. I do know that I had three choices. One was to remain angry and revengeful, which only generates more pain. The second was to run and hide from those feelings — impossible! The third was to accept them as an incomprehensible part of the life spectrum. In that third way, I, too, could “feel more alive.”

It was a difficult lesson — for a Jew, for a Pole, for a journalist who thinks he needs answers — and I honestly still haven’t mastered it. For now, though, I assuage my suffering with the Buddha’s own words: “Holding on to anger is like grasping a hot coal with the intent of throwing it at someone else; you are the one who gets burned.”

Perry Garfinkel is the author of “Buddha or Bust: In Search of Truth, Meaning, Happiness and the Man Who Found Them All,” to be published June 20 by Harmony Books, from which this is adapted.