A Tibetan retreat in the hills of Loulé

Algarve, Portugal -- IT IS unlikely that many people in the Algarve have ever heard of, or visited, Humkara Dzong, a Tibetan Buddhist centre in Moinho do Malhão, one of the highest points in the Loulé region. 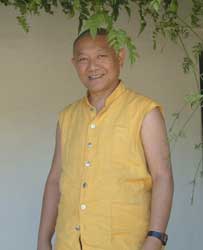 Humkara Dzong is part of the Ogyen Kunzang Chöling (OKC) school of Tibetan Buddhism, mainly practised in France and Portugal. Recently, the centre held a one week retreat, led by Ringu Tulku Rinpoche, a Tibetan Buddhist Master of the Kagyu Order.

Close to 100 people attended the retreat, which held teachings in English with translations in French and Portuguese. Ringu Tulku Rinpoche has been a Professor of Tibetology in Sikkim, India, for 17 years, and is the author of several books, including Path to Buddhahood and Daring Steps Towards Fearlessness.

Born in Eastern Tibet in 1952, he was forced to relocate to Sikkim in the Himalayan foothills of northern India when he was young, due to the Chinese takeover of Tibet. As a baby, he was declared as Rinpoche of the Rigul Monastery. A Rinpoche is a recognised, reincarnate lama (a trained, authorised, learned and empowered spiritual teacher in the Tibetan Buddhist tradition), and one who has voluntarily been reborn to help lead others to enlightenment.

Since 1990, he has been travelling and teaching Buddhism and meditation at more than 50 universities, institutes and Buddhist centres around the world. He is also the founder of Bodhicharya, an international organisation that co-ordinates worldwide activities to preserve and transmit Buddhist teachings, in order to promote intercultural dialogues as well as educational and social projects.

Rinpoche began travelling in 1990 after he received an invitation to host a retreat in Scotland. He then received more and more invitations, which he was always happy to accept. After travelling around the majority of Europe, including the UK, France, Scandinavia, Spain, Belgium and Germany, and also teaching in the US, Australia, Canada and Asia, he made his first trip to the Algarve in 1999 and has been back five times since.

Throughout the recent retreat held in Moinho do Malhão, Rinpoche delivered two teachings a day, focusing on the text of the Jewel Ornament of Liberation, one of the most important texts for those seeking a foundation in Tibetan Buddhism. Prayers also took place at 6am and 6pm, with a period of silence being observed everyday at 9pm for private meditation.

Buddhism is the world’s fourth largest religion. Beginning over 2,500 years ago, it is becoming increasingly popular in the western world. Rinpoche believes this is because “more people want to increase their spiritual side and focus on inner transformation”. He understands that people decide “material development alone does not bring happiness; spirituality will guide one in finding one’s true self”.

A common misconception is that it is difficult to practise Buddhism in more developed cultures. However, many westerners are now going to long term retreats in order to immerse themselves in finding their ‘Buddha nature’, but Rinpoche does not consider this a necessity for everybody: “Buddhism is different to more conventional forms of worship. There is no set process for people who want to practise Buddhism or their Buddha nature. It should not matter where you are. Buddhism is about controlling your emotions, the way you react to situations, your conscious habits and way of being.”

Buddhism was relatively unknown in the western world until Tibet was taken over by the Chinese in 1959. It was then that Tulkus became more interested in spreading knowledge about the religion and helping people all over the world. “It is very different in the West,” states Rinpoche. “In Asia, people come to me with problems about survival, how to care and keep their family alive. In the West, people look to Buddhism for spiritual and psychological guidance”.

There are few religious dimensions that must be adhered to in Buddhism, therefore there is no devised process of officially becoming a Buddhist. Rinpoche describes how it is all a matter of practising the different methods: “It is mainly logic, reasoning, discussion and, above all, it is about being mindful. To discover more, all you need to do is start reading books to understand the different types of Buddhism, and see which you connect with and which path you feel is right for you to practise. Once you have decided upon this, there are numerous courses and retreats all over the world for people to visit and learn more.”

Rinpoche enjoys the “relaxed holiday atmosphere” of the Algarve. Most of his time is spent in the mountains of Malhão, but, on recent trips out, he visited Zoomarine in Guia to see the dolphins and has been to the Algarve’s most westerly point, Cabo de São Vicente in Sagres. Occasionally, he takes time out in the evenings to go to the beaches near Loulé.

Buddhism is amassing more interest in Portugal, with an array of centres spreading over Lisbon, Porto and the Algarve. There are plans being put in place for the Dalai Lama to visit Portugal next year. However, due to health problems, he had to cancel his recently scheduled trip to France, so it is unlikely that any confirmed details will be announced until he has fully recovered.