Tuva, Russia -- The first Buddhist prayer drum installed into a small 'house' has been open for public at large on Arat Square in Kyzyl near the fountain complex. The drum faces the buildings of the Government, Parliament of Tuva, and Drama Theatre surrounding the central square. 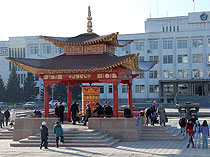 At the opening ceremony Kyzyl mayor Dmitri Dongak and head of the buddist society 'Enerel' (Compassion) Aneta Bodur-Oorzhak spoke to those present.

The body of the prayer drum was filled with the mantra "Om mani padme hum" in SansKrit and Tibetan. It was made in India by a special order of Tibetan Lamas of Gyudmed. Inside the drum there are more than one hundred million mantras of the Buddha of Compassion, which help to fill people's hearts with compassion and love.

Monks believe that the drum rotation with sincere belief in one's heart is the same in power as reading millions of holy mantras placed inside it. The prayer drum brings comfort and peace to people's hearts, gives harmony to the environment and puts local spirits down.