Kalmykia, Russia -- In the early days of October, Kalmykia celebrated the tenth opening anniversary of the republic’s first Buddhist monastery: Geden Sheddup Choikorling. Considering the very rapid pace of development of Buddhist teaching in the steppe republic, this celebration has in some way become a new milepost, on the one hand allowing for a backward glance and on the other a look forward to the new day. 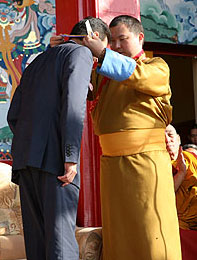 Kalmykia made the revitalization of Tibetan Buddhism a high-priority for regional development, and can now offer Buddhist Russia a well substantiated hope for resolving a great diversity of burning issues. First, among all Russian Buddhist Republics only Kalmykia was able to stage (even if only a most brief) visit by the Dalai Lama in November of 2004.

Tuva and Buriatia are still forced to speak of a fourteen year lapse since the last close contact with their spiritual leader, who should ideally guide Buddhism’s future spiritual development. Second, the changes coming on the heels of the one-day 2004 visit could be stunning not only a Buddhist from Buriatia or Tuva, but any non-Buddhist from any economically developed location on the planet’s surface.

The Temple of the Golden Abode of Buddha Shakyamuni, built in nine months, in the very center of the Kalmyk republican capital Elista, became the material manifestation of the strength of the Dalai Lama’s blessing, and the good intentions of his Kalmyk followers, among whom a special place is held by the republic’s supreme lama Telo Tulku Rinpoche and the head of Kalmykia, Kirsan Ilyumzhinov.

Their cooperation and devotion to His Holiness the Dalai Lama are likely the major reason to view the future of Buddhism in Russia with a certain dose of optimism.

Geden Sheddup Choikorling monastery opened to great fanfare on October 5, 1996. “On that day, forty to fifty thousand people gathered together, sincerely hoping for an impending rebirth of the almost lost Buddhist culture and religion.” remembers Tashi, the representative of His Holiness the Dalai Lama in Russia, Mongolia and the Commonwealth of Independent States. “At that time maybe three of four temples had been built in Kalmykia, today there are over thirty.”

The supreme lama of Kalmykia, Telo Tulku Rinpoche, considers this a very significant achievement. “In the twelve to thirteen years since the beginning of the spiritual revival, we reached better results that those of which even the wealthy countries can speak,” he says. “Look at Kalmykia, a small country with a population of 300 thousand people. Truly such rapid development is the source of incredible inspiration not only for the Kalmyk people, but the whole world.” Even America has not managed to build thirty-three Buddhist monasteries in twelve years,” he adds with a smile.

It was in America itself, in a family of Kalmyk émigrés that the future head lama of Kalmykia was born. At the suggestion of His Holiness the Dalai Lama, his parents took the six-year-old boy, even then interested in monastic life, to the Tibetan Drepung Gomang monastery, rebuilt in India.

“Among Buriat lamas, legends about a little Kalmyk boy who came to Drepung Gomang with his parents, and expressed a desire to remain at the monastery were circulating back then. Later the Dalai Lama recognized him as the incarnation of Tilopa. In his past incarnation he had been a great Mongol lama,” recalls Choi Dorjee Budaiev.

First finding himself in Kalmykia in 1991, Telo Tulku Rinpoche was soon elected the supreme lama of the steppe Buddhist republic. The difficult years preceding the opening of the first Buddhist Monastery in Kalmykia quickly return to his memory:

“Building that temple was considerably more difficult than the Golden Abode of Buddha Shakyamuni. In many ways we had to start from zero, we had no experience, no knowledge, no financial backing,” he says.

In the days leading up to the anniversary, Telo Tulku Rinpoche established a special gold medal “For Contributions to the Development of Buddhist Teaching,” which he ceremonially presented to Kirsan Ilyumzhinov, the head of Kalmykia. President Ilyumzhinov had contributed his own funds to the building of the first monastery. An old video-tape shows them together at the monastery’s opening, cutting the ribbon to open not only the first monastery in Kalmykia, but the first monastery in Russia abiding in the monastic rules and prescriptions of the Buddha Shakyamuni.

Since then Geden Sheddup Choikorling monastery has had many important guests. In the summer of 2005, even the President of Russia, Vladimir Putin paid a visit.

Receiving the gold medal from Telo Tulku Rinpoche’s hands, Kirsan Ilyumzhinov remembered how surprised the Russian president was at the interwoven patterns of the supreme lama’s fate: born in America, educated in a Tibetan monastery in India, and now back in Kalmykia to aid in Buddhism’s revitalization in the land of his ancestors. “We thank you, an American citizen, for helping us so,” Putin said at the time.

Many who’ve had occasion to visit Kalmykia would certainly note the positive atmosphere permeating the interrelationships of all faiths coexisting here. All the calls of innumerable pathos-filled declarations made at world religious forums are realized in this place calmly and naturally, with no superfluous noise and fuss. No one is surprised that a delegation of Russian Orthodox monks headed by Archbishop Zosima of Elista and Kalmykia are among the honored guests at a the anniversary celebrations of a Buddhist monastery, and that Vladyka Zosima also received a gold medal “For Contributions to the Development of Buddhist Teaching,” from the supreme lama of Kalmykia. Vladyka Zosima and Telo Tulku Rinpoche share the ties of a longstanding friendship, a friendship which according to the Vladyka occasionally elicits misunderstanding and jealousy, but nevertheless remains steadfast.

In the past, Vladyka Zosima has visited the His Holiness the Dalai Lama in his residence in Dharamsala. They have also met more than once in Kalmykia itself.

Their last meeting in Elista in November of 2004 was filled with such a penetrating joy and warmth, no one present had any doubts that harmony between faiths is no ephemeral dream, but a most tangible reality if the founding postulates of one’s own faith are just followed in earnest.

Presenting the medal to Vladyka Zosima, Telo Tulku Rinpoche was reminded of his own recent meeting with His Holiness the Dalai Lama during the latter’s September visit to the United States: “We were speaking of a completely different topic, when His Holiness suddenly stopped and asked: “So how is my brother Zosima?”

In his response, the Vladyka relayed congratulations to the head lama of Kalmykia from Alexii II, Patriarch of Moscow and of all Russia. In his congratulatory telegram the Patriarch noted that the Russian Orthodox Church traditionally maintains good relations with the followers of Buddhism. “In our years of coexistence on Kalmyk soil, cooperation in the social sphere between the followers of two traditional religions,” wrote Alexii II, “occurred, and continues to occur not only at the level of religious leaders, but also at the level of ordinary believers.”

As for believers, they tend to follow examples set by their spiritual leaders, especially when it comes to potentially thorny issues such as interfaith relations.