Staffordshire, UK -- The week-end opening of a new Thai Buddhist Temple in King Bromley in Staffordshire raised over £20,000 towards its purchase and attracted over 1,200 visitors. 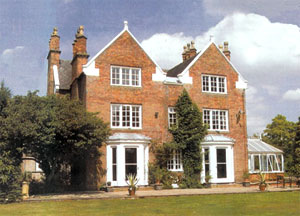 At the opening, an appeal was launched to help repay the loan required for the building. Members of the public were invited to purchase a square metre of the land in which the temple is located.

The official opening of the Buddha Vihara Temple on Saturday, was attended by a host of dignitaries including the Thai Ambassador to the UK, His Excellency Kitti Wasinondh and Colonel David Leigh – the Deputy Lord Lieutenant of Staffordshire and representatives of the Buddhist Community from the UK and world-wide.

Colonel Leigh recalled playing in the grounds of the house as a child and his mother, who attended the ceremony, still live in the village.

The ceremony included ceremonial chanting by a large group on Thai Buddhist monks based at the new temple and Thai puppeteers.

A family fun day on Sunday attracted over 1,000 visitors including many local residents who relaxed in the gardens, toured the house which now serves as the temple, enjoyed traditional Thai cooking and entertainment.

Phil Henry, a spokesman for the Temple said, “It was a fantastic occasion and we would like to thank our neighbours for their help and support and everyone who turned up to make it a truly memorable occasion. Visitors came from across the UK and worldwide, but it was particularly nice to see so many people from Kings Bromley itself and from the rest of Staffs and Derby.”

During the week-end. Local couple Mr and Mrs Houldcroft presented the Temple with an Acer tree to be planted in the garden, memory of their son, David who died 10 years ago this month at the age of 27. The couple had also collected £140 from the residents of Kings Bromley to contribute to the Temple appeal.

Details of the Temple can be found on www.watthaiuk.com