The Dalai Lama closes Hamburg visit with call for Compassion

Around 45,000 people flocked to a Hamburg stadium to listen to the Dalai Lama

Hamburg, Germany -- The Dalai Lama ended his 10-day visit to Hamburg on Friday with a call for more compassion and criticism of the actions of Chinese security forces in Tibet. 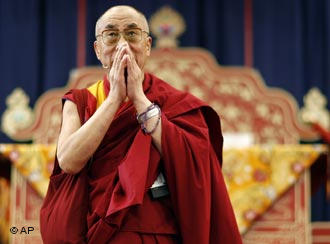 "The more we try to make others happy, the happier we will be ourselves," the Dalai Lama told his audience at a tennis stadium in the northern German port city.

An estimated 45,000 people are reported to have followed the lectures of the spiritual leader of the Tibetans since he arrived in Hamburg last weekend.

The Nobel Peace Prize winner will fly to the southern German city of Freiburg on Saturday and will fly back Sunday to Dharamsala in India where he lives in exile.

Earlier, the 72-year-old told German news agency dpa in an interview that Chinese forces continued to commit grave human rights violations in Tibet, adding there had been repeated incidents with Chinese guards at the border.

"Many who tried to escape were shot," the Dalai Lama said, adding that Tibetan culture was being undermined by the Chinese.

Asked if his popularity in western nations was a form of pressure on the Chinese government, he said, "My main motivation is not the Tibet issue. My concern is the promotion of human values."

He, however, conceded that the Chinese are increasingly more interested in Tibetan Buddhism.

"That is making their attitude on Tibet more positive," he added. China has controlled Tibet since 1950.

In his lectures over the past days, the Dalai Lama has urged industrialized nations to take more responsibility for the developing world. He has also spoken out in favor of organ donation.

At an international conference for Buddhist nuns, he called for equal rights for nuns and monks in Tibetan Buddhism.