The 2007 Rafto Prize is awarded to The National Campaign on Dalit Human Rights, India

Oslo, Norway -- The Board of the Thorolf Rafto Foundation for Human Rights awards the 2007 Rafto Prize to the Indian organisation The National Campaign on Dalit Human Rights (NCDHR). Millions of Indians are born into a social and cultural system which fundamentally conflicts with the notion that all human beings are born free with equal rights. 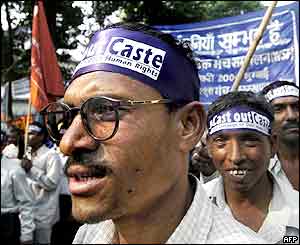 The NCDHR receives the 2007 Rafto Prize for its brave struggle to promote Dalit rights, and for its efforts to emphasise that the discrimination and oppression resulting from caste prejudice is a serious violation of international human rights.

Of India's 1 billion citizens, 167 million are labelled as 'impure','casteless' or 'untouchable'. These people have named themselves Dalits, meaning 'the oppressed'. The identity of the Dalit people, and their struggle for dignity and basic human rights, has been formed through thousands of years of humiliation, discrimination, and exclusion.

Dalits are refused equal access to education and health services, experience harsh discrimination in social and religious life, and are excluded from all but the most menial of jobs. In many areas, Dalits have their property taken away from them, and are forced to relocate to other villages and towns against their will. Every day, the Indian police and the judicial system turn a blind eye while Dalits are subjected to caste-motivated murder, rape, and harassment.

The caste system is an intrinsic part of Hinduism, the world oldest religion, and the dominant faith in India. According to the teachings of Hinduism, all individuals are born into a caste which awards them different status and defines their opportunities in life. Caste discrimination is also a problem within other religions. An example of this is Christian churches discriminating against Christian Dalits through allocating separate mass and burial grounds for them.

NCDHR has developed a wide support network of volunteers, organisations and groups throughout India. In cooperation with local organisations they have established committees to monitor the Dalits' circumstances. However, its work in challenging prejudices and social structures has its price. NCDHR activists have been taken into custody by the police, in an attempt to threaten them into silence. Also, international activists fighting for the Dalit cause are being denied entry into India because of their work.

This year, India, the world's largest democracy, celebrates its 60th year of independence. The country's constitution clearly states that discrimination based on religion, sex or caste is prohibited, yet the Dalits continue to face systematic discrimination in all spheres of Indian society. Dr Bhimrao Ambedkar (1891-1956), who was himself a Dalit and the architect behind the Indian Constitution, conceded that, "Rights are protected not by laws, but by the social and moral conscience of society".

India's efforts to enforce laws that are meant to protect Dalits are severely flawed. Indian Prime Minister Manmohan Singh became the first leader of his country to compare the condition of Dalits with that of black South Africans under apartheid. India must prioritise the fight against the oppression of Dalits and other marginalised groups, and ensure an end to the systematic violation of human rights.

The European Union has an important role to play in eliminating caste discrimination. The EU should utilise all relevant UN and other forums to urgently raise awareness for the issue and to develop appropriate action. It should adopt a policy commitment at the highest level which obliges the EU and its member states to challenge the governments of afflicted countries and support them to end this form of discrimination. The issue should be prioritised during all human rights and political dialogues with leaders of these countries, and in particular at EU-India summits. Furthermore, the EU should instigate cooperation between member states to arrange for development support to reach the Dalits, ensuring non-discrimination in this action.

The Rafto Foundation encourages Norwegian authorities to address caste discrimination through their bilateral cooperation with India, and neighbouring countries. Many people in Pakistan, Bangladesh, Nepal and Sri Lanka face a similar discrimination based on their heritage, religion and profession. Norway must support and champion initiatives in the UN which focus on the caste issue, and develop policies aimed at eliminating this form of discrimination.

Norwegian and international companies investing in, and trading with, India and its South-East Asian neighbours have a responsibility to counteract the caste discrimination prevalent within the labour market. These companies should follow the employment and hiring guidelines aimed at fighting economic and social exclusion, as outlined in the Ambedkar Principles.

The oppression experienced by the Dalits today indicates that respect for human rights cannot be taken for granted, even in democracies such as India, which is a signatory to most international human rights conventions.

The 2007 Rafto Prize is awarded at Den Nationale Scene in Bergen, Sunday November 4th at 18:00

-------------------------------
The Rafto Foundation was established after the death of Professor Thorolf Rafto in 1986, in gratitude of his longstandig work to help people who are oppressed and persecuted, and in the realization that this work must be ongoing. The Rafto Prize is a human rights award gaining international status, several Rafto laureates: Aung San Suu Kyi, Josè Ramos-Horta, Kim Dae-Jung and Shirin Ebadi, have subsequently been awarded the Nobel Peace Prize. The Rafto Prize contributes to a focus on human rights violations and on people and communities which need the attention of the world.