Karma police hunt for thieves who made off with valuable ornaments

London, UK -- BUDDHA burglars have struck at a Kentish Town garden centre for the second time this year, uprooting 10 of the pot-bellied gods from their meditation. 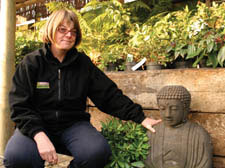 Ignoring the possibility of bad karma, the thieves stole the Balinese stone statues, most worth several hundred pounds, from the Boma Garden Centre in Islip Street on Sunday night.

Their path to enlightenment was through the centre’s fencing, parts of which they removed so the heavy buddhas could be passed into the street outside.

Denise Matthew, co-owner of the garden centre, said: “It’s so sad. These are unique. It’s a massive effort for us to get them.The statues are imported direct from Bali. Why violate the poor little buddhas? Just leave them alone.”

She added: “This wasn’t just done on the spur of the moment. You can ­carry a buddha but it’s not for the fainthearted. You couldn’t just walk down the street with it.”

The biggest statue taken was a hand-carved 3ft deity costing £390, though the burglars appeared to think better of taking the giant buddha, which needs two men to lift.

Since the centre opened in 2002 it has suffered “at least 10 break-ins”, according to Ms Matthew. Another burglary in January saw six buddhas stolen and oil poured into the fishpond.

On that occasion the buddhas were recovered on the neighbouring Peckwater estate – four were found sitting placidly under a tree while a less fortunate pair lay headless in the driveway.

Sanghadasa (Buddhist name), a manager at the London Buddhist Centre, denied that it was sacrilegious to steal an image of the Buddha.

“A buddhist can give these signs meaning but they are just images in themselves. The thieves probably see it as an image that can earn them money and the garden centre sees it in the same way,” he said.

“I can’t speak for the whole Buddhist tradition but there’s a general practice of trying not to take the not given. As an individual your actions will have consequences – the Buddha leaves it there.”

He added that he wouldn’t advocate punishment because the culprits would “suffer the consequences of their actions”.

Kentish Town police have different ideas. A spokesman confirmed they were looking for the missing Eastern gods and their abductors, though no arrests had yet been made.

Ms Matthew added: “My plea is if anybody gets offered a buddha, please let us know.”