A Zen of Compassion 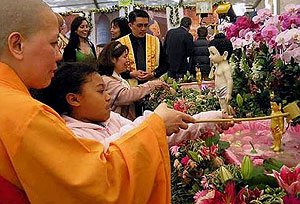 Come rain or shine, it was to have been another great day of food, fun and entertainment in the city that never sleeps.

With giant cinema posters, casino billboards and glamorous nightspots vying for attention, it’s no wonder many can easily succumb to the affluent lifestyle.

Yet amidst the glitz and gloss of a city bursting with materialistic life, a symbolic ceremony of mind purification took place in Leicester Square Gardens, just a stone’s throw away.

Soothing hymns filled the air, providing a calming effect on the hustle and bustle of the madding crowd patronising shops, pubs and restaurants nearby.

From nuns performing a graceful tai-chi like zen exercise to devotees taking part in the Buddha Bathing ritual, the activities were among the highlights of the Buddha’s Birthday celebrations, known as Wesak Day in Malaysia.

The festival has, in fact, grown to become the largest outdoor Buddhist event in Britain since it was first organised by London Fo Guang Shan Temple in 1994.

Amidst the joyous birthday celebrations, the victims of Cyclone Nargis in Myanmar and the Sichuan earthquake in China were not forgotten.

Temple abbess Venerable Chueh Ru Shih and three senior nuns led special prayers for the victims on both days while charity sales were held to raise funds for them.

“Our prayers go to the victims,” said Ven Chueh, who is from Bukit Pelanduk, Negri Sembilan, after the session which was attended by more than 100 devotees.

About 10 tonnes of foodstuff as well as 1,000 tents and 2,000 sleeping bags were also despatched to the earthquake victims while the temple’s Thailand chapter had been mobilised to organise relief aid for Myanmar.

There’s no doubt that the organisation’s humanitarian efforts deserved commendation as it was in line with the celebration’s theme “Compassion and Wisdom.”

Aimed at promoting family harmony and world peace, the event hoped to encourage cultural exchanges between the East and West.

The celebrations was also graced by a host of VIPs, including Lord Mayor of Westminster Louise Hymns while Jean-Louis Cardinal Tauran, president of Vatican City’s Pontifical Council for Inter-Religious Dialogue extended his warm greetings for the occasion.

Among others, he spoke of the positive relationship between Catholics and Buddhists over the years and was confident the deeper understanding would contribute towards building a better world.

Ven Chueh, who took over as temple abbess last month, said she was happy to have met many Malaysian devotees as well as those from Singapore, Hong Kong, China and Vietnam.

“We want to promote harmony, peace, respect and cultural awareness in our culturally-diverse society,” said Ven Chueh, who is also deputy chief abbess of Fo Guang Shan in Europe and Britain.

Prior to her posting to London, she was in charge of the Fo Guang Shan Geneva Conference Centre from 1996 until last year.

Indeed, the temple seems to have an affinity with Malaysian abbess; the previous head Ven Chueh Yann was from Muar and is now heading the organisation’s Geneva centre.

Being multi-lingual in English, Mandarin, Cantonese and Hokkien probably gives Malaysians the edge, especially in dealing with devotees who speak a variety of languages.

Ven Chueh believes that coming from a multi-racial, multi-cultural country like Malaysia has helped her to deal with people from different faiths.
TOP