Buddhist protestors angry at "illegal and aggressive ban" on prayer

Oxford, UK -- The organisers of the Dalai Lama’s visit to Oxford have predicted that as many as 1,000 protesters could assemble outside the Sheldonian Theatre, where he is due to speak today. 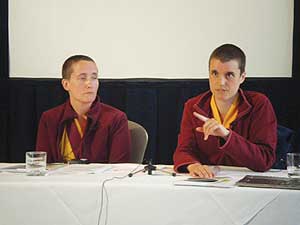 From 9am onwards, Buddhist protesters, led by the Western Shugden Society, will be on Broad Street to confront the Dalai Lama with allegations of threats and intimidation from his representatives. Protesters have followed the Dalai Lama throughout his visit to the UK.

They want to encourage the Dalai Lama to lift “an illegal and aggressive ban on a much loved, centuries old Buddhist prayer.”

The prayer, known as ‘Dorje Shugden,’ is said to have been a traditional part of the Buddhist religion for 400 years, which the Dalai Lama is said to have practised himself until he was 50 years old. He is currently 72 years old.

In a press conference yesterday, a Kelsang Pema spokesperson for the Western Shugden Society, said: “The Dalai Lama has imposed this ban and has left Buddhists no choice...he is impeding human rights.”

The Western Shugden Society claims that 900 monks have been expelled from monasteries by Dalai Lama representatives, and Dorje Shugden practicioners are “receiving threats and are ostracised from communities because they practise the prayer.”

The Dalai Lama has previously commented on his decision to ban the prayer.

He said, “The fifth Dalai Lama considered this an evil force, evil spirit…

The 13th Dalai Lama also placed restrictions on this evil spirit. So then I realised my mistake and then I stopped completely worshipping this.”

The Western Shugden Society claims that the Dalai Lama has “two hats; one political and one religious.

“There is a false perception that he [Dalai Lama] is the leader of Buddhism. He has inherited the title through reincarnation... three quarters of Buddhist would not say that he is their spiritual leader.”

When asked if the Society would be concerned that they would be seen as pro- China, a spokesperson said: “We are not connected to the Chinese although the Dalai Lama says that we are...this is religious discrimination not political.”