Back to the world after 1,190 days of meditation

Three years ago, dozens of Buddhists from across Europe converged on France's rural Auvergne region to start a long spiritual retreat. They returned to the world last month before FRANCE 24’s cameras

Paris, France -- The Auvergne is a popular tourist destination, famed for its volcanoes. But there’s another attraction drawing dozens of Buddhists from across Europe. Three years ago, a group of Buddhists embarked on a long spiritual retreat and are just about to return to the world after 1,190 days of meditation. 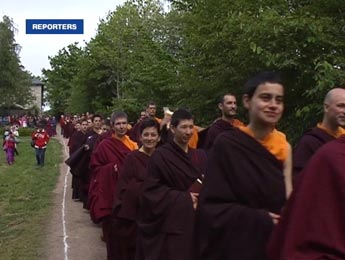 The retreat is a unique experience of a particularly austere form of voluntary isolation, complete with a severe daily regime, including 12 hours of meditation per day. They returned to the world last month.

It was in the Auvergne, in these majestic environs, that the community of Dhagpo Kunfrun decided to set up its hermitages and its meditation centers in 1984.

On the eve of their exit, the entire community is present and preparing for their departure. One of the Buddhist, Bruno, talks about his decision to make the retreat. “For me, it’s a gift, a life experience. People who do not know might be afraid. We are there to reassure them, to show to them that we are really happy for them. That it really comes from us, from our souls.”

In the Karmapa temple, everything is ready for departure the next day. The procession walks toward the Buddha in the grand Karmapa temple - on one side, the men, on the other, the women.

The genders are not mixed, but unlike in Buddhist countries, women here are accepted. A moderate Buddhism in light with the Western Kagupa school, one of the four universities of Tibetan Buddhism.

At the end of the road, a crowd of 2,000 people awaits them at the entry of the temple. It is their official return to the world. A ceremony is set up and everyone who has done the retreat receives a yellow scarf, symbol of the retreat.

Then, after three years, three months and three days, the doors of the center open.

With close-cropped hair and smiles on their lips, these men and women emerge from a more than 1,000-day retreat. The majority are French, but there also Germans, Belgians and Swiss nationals. They seek out their loved ones. This is an intimate moment and our presence is barely tolerated.

During their stay, these people have been followed by spiritual guides, lamas, such as Landroup, the leader of the retreat, their only bond with the outside world. "They are very happy and content to have achieved this phase of retreat, which will remain a cherished memory, a treasure. They will realize in the weeks to come when they compare their lives before the retreat and now.”