From Ruins of Afghan Buddhas, a History Grows

BAMIYAN, Afghanistan -- The empty niches that once held Bamiyan’s colossal Buddhas now gape in the rock face - a silent cry at the terrible destruction wrought on this fabled valley and its 1,500-year-old treasures, once the largest standing Buddha statues in the world. 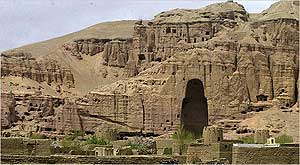 << A huge empty niche now punctuates the majestic Bamiyan Valley of Afghanistan where the giant western Buddha, one of two, once stood.

It was in March 2001, when the Taliban and their sponsors in Al Qaeda were at the zenith of their power in Afghanistan, that militiamen, acting on an edict to take down the “gods of the infidels,” laid explosives at the base and the shoulders of the two Buddhas and blew them to pieces. To the outraged outside world, the act encapsulated the horrors of the Islamic fundamentalist government. Even Genghis Khan, who laid waste to this valley’s towns and population in the 13th century, had left the Buddhas standing.

Five years after the Taliban were ousted from power, Bamiyan’s Buddhist relics are once again the focus of debate: Is it possible to restore the great Buddhas? And, if so, can the extraordinary investment that would be required be justified in a country crippled by poverty and a continued Taliban insurgency in the south and that is, after all, overwhelmingly Muslim?

This valley about 140 miles northwest of Kabul, where in the sixth century tens of thousands of pilgrims flocked to worship at its temples and monasteries and meditate in its rock caves, is attracting new international attention.

In 2003, the United Nations designated the Bamiyan ruins a World Heritage site, but also listed them as endangered, because of their fragile condition, vulnerability to looters and pressures from a post-Taliban boom in construction and tourism. Intensive efforts have been under way to stabilize what remains of the cliff sculptures and murals.

Meanwhile, archaeologists have been taking advantage of the greatly increased access that became possible once the statues were gone to make new discoveries — and to pursue ancient tales of a third giant Buddha, possibly buried between the two that were destroyed.

“The history of Bamiyan is beginning to be revealed, in a concrete sense, for the first time through both works of conservation and excavations of archaeological remains,” said Kasaku Maeda, a Japanese historian who has studied Bamiyan for more than 40 years.

Unesco has been overseeing a program of emergency repairs to the niches over the last few years, drawing teams of archaeologists and conservationists from all over the world. “The site is in danger,” said Masanori Nagaoka, a cultural program specialist at Unesco’s Kabul office.

Gedeone Tonoli, a tunnel engineer from Italy, has been overseeing the most urgent task: securing the cracking cliff face. One morning two Italian mountain climbers swung on ropes at the top of the niche that held the eastern Buddha, which, at an astounding 125 feet tall, was the smaller of the two. Wire netting covered the back wall of the niche, which still occasionally rattles with falling rocks and stones. A great scar marks the inner left wall where the explosion tore away the side of the niche, threatening the whole cliff.

The right side of the niche, however, has been stable for two years, anchored with steel rods and tons of concrete pumped into the fissures. Tiny glass slides are taped to the rock, and sensors linked to a computer keep track of every tremble in the cliff face. Before, Mr. Tonoli said, “you could see the sky here and birds were flying in.”

At the base of what, at 180 feet, had been the larger Buddha, workers were still shoveling away at rubble left from the explosions. German restorers from the International Council on Monuments and Sites have spent two years carefully sorting through the debris from both Buddhas, lifting out the largest sections by crane — some weigh 70, even 90 tons — and placing them under cover, because the soft stone disintegrates in rain or snow. The smaller fragments and mounds of dust are carefully piled up at the side.

Reports that the Taliban had taken away 40 truckloads of the stone from the statues to sell were not true, said Edmund Melzl, a restorer. “From the volume we think we have everything,” he said. Yet only 60 percent of that volume is stone, he added. The rest crumbled to dust in the explosions.

The Buddhas were only roughly carved in the rock, which was then covered in a mud plaster mixed with straw and horsehair molded to depict the folds of their robes and then painted in bright colors. Workers have recovered nearly 3,000 pieces of the surface plaster, some with traces of paint, as well as the wooden pegs and rope that were laid across the bodies to hold the plaster to the statue. The dryness of Afghanistan’s climate and the depth of the niches helped protect the statues and preserve the wood and rope.

The larger Buddha was painted carmine red and the smaller one was multicolored, Mr. Melzl said.

The most exciting find, he added, was a reliquary containing three clay beads, a leaf, clay seals and parts of a Buddhist text written on bark. The reliquary is thought to have been placed on the chest of the larger Buddha and plastered over at the time of construction.

The fragments have been carefully stored while the main task continues: to gather all the rubble so that the Afghan government and experts can decide what to do with it. There have been calls to rebuild the Buddhas, mostly from Afghans who feel that restored statues would provide a greater tourist attraction, and a righting of wrongs. Unesco has warned that for Bamiyan to retain its status as a World Heritage site there must be no new building, only preservation. Yet the alternative of displaying 200 tons of recovered material in a museum does not seem feasible, said Michael Petzet, president of the International Council on Monuments and Sites. 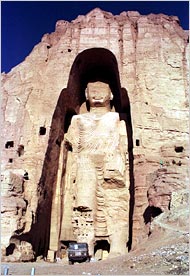 The one restoration approach considered acceptable by Unesco and other experts is anastylosis, often used for Greek and Roman temples, in which the original pieces are reassembled and held together with a minimum of new material. Michael Urbat, a geologist from the University of Cologne, has analyzed pieces of the larger Buddha and from the rock strata has been able to work out what part of the vast statue they came from.

But reassembling pieces that can weigh up to 90 tons would be extremely difficult; Afghanistan does not even have a crane strong enough to hoist them, Mr. Melzl said. The reconstruction project, which the governor of Bamiyan Province has estimated would cost $50 million, would probably also become a political issue in this impoverished Muslim country, where more than 10 percent of the population remains in need of food aid.

Nevertheless, the provincial governor, Habiba Sarabi, favors rebuilding the Buddhas using anastylosis, and said she would propose that the central government make a formal request to Unesco. Professor Maeda said he supports the idea of reassembling one of the Buddhas and leaving the other destroyed as a testament to the crime.

The government also approved the proposal of the Japanese artist Hiro Yamagata to mount a $64 million sound-and-laser show starting in 2009 that would project Buddha images at Bamiyan, powered by hundreds of windmills that would also supply electricity to surrounding residents.

Meanwhile, simply preserving what remains is daunting. Once the niches, grottos and caves were covered with murals, but 80 percent were obliterated by the Taliban, Professor Maeda said. Art thieves also did damage, using ropes to climb into caves 100 feet up on the cliff face and hacking away priceless medallions depicting seated Buddhas. One of them made its way to Tokyo, where an art dealer, suspecting its illicit provenance, showed it to Professor Maeda, who has managed to retrieve more than 40 stolen artifacts.

“One day I hope we will return them to Afghanistan,” he said.

He continues to scour the caves, and finds small joys amid the destruction. One cave that he first discovered during his first trip here, in 1964, so blackened by soot from camp fires that the Taliban and looters passed it by, has revealed fine paintings of tiny animals — a lion and a wild boar, a monkey, an ox and a griffin — rare in Buddhist art, but characteristic of Bamiyan, which combines Indian, Iranian and Gandharan influences.

While the focus now is on conservation, experts know there is more to discover. At least two teams of archaeologists are engaged in a discreet race to discover a third colossal Buddha that may have once lain between the two standing Buddhas.

The Chinese monk Xuan Zang visited Bamiyan in 632 and described not only the two big standing Buddhas, but also a temple some distance from the royal palace that housed a reclining Buddha about 1,000 feet long. Most experts believe it lay above ground and was long ago destroyed.

But two archaeologists, Zemaryalai Tarzi of Afghanistan and Kazuya Yamauchi of Japan, are busy digging in the hope of finding its foundations. Mr. Tarzi, who excavated a Buddhist monastery this year, may have also found the wall of the royal citadel that could lead the way to the third Buddha. He plans to return next year to continue digging.