Bamiyan, Afghanistan -- Dr Zemaryalai Tarzi is an Afghan with a big dream. To be exact, this archaeologist dreams of a giant - a 1,000ft (300 metre) sleeping Buddha. 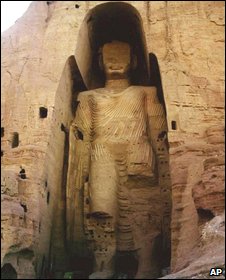 Try to imagine a stone statue reclining across the length of three football fields.

But it is more than a dream. Dr Tarzi is trying to make it a reality.

"At first, people told me I must be mad," he recounted, barely concealing a smile, as we stood at his excavation in the midst of potato fields in the ancient Afghan city of Bamiyan.

"An archaeologist needs proof. We need to keep searching."

Dr Tarzi, who has been mapping the landscape of Bamiyan for 40 years, is renowned world-wide for his knowledge of the Buddhist civilisation that flourished centuries ago in the central highlands of Afghanistan.

Bamiyan was a storied destination for travellers journeying on the Silk Road between East and West.

In the 7th Century, a Chinese pilgrim, Xuan Zang, marvelled at a colossal reclining statue: "To the east of the city there is a monastery in which there is a figure of Buddha lying in a sleeping position, as when he attained nirvana. The figure is in length about 1,000 feet."

It read like tantalising proof because Xuan Zang also wrote with passion, and precision, of two magnificent stone Buddhas which stood guard over the valley.

The Taliban smashed those statues, the world's largest standing Buddhas, in 2001, denouncing them as un-Islamic idols.

That gave further fuel to Dr Tarzi's drive to find the third Buddha. It was an archaeologist's revenge.

"A country's history cannot be destroyed," he fumed.

I first visited Dr Tarzi in 2005, during the summer months he spends at the dig.

It was hard not to find myself willing him to succeed. He confessed, his voice breaking, he still could not bear to look at the gaping niches in the stone cliffs towering over the place where he was working.

He is still there, looking for all the world like an Afghan Indiana Jones of the epic films, with his chino apparel, floppy hat, and air of scholarly adventure.

The earthen cavities are hives of activity. Afghan archaeologists trained by Dr Tarzi and French colleagues from Strasbourg University gently tap picks and trowels in the dust and dirt, backed up by a small legion of labourers.

His team's diligent search for hidden treasures has yielded a stunning array of stone remnants from the remains of Buddhist monasteries - small feet from statues, chiselled folds of monastic robes, sacred stupas.

Then, last November, a cry of excitement rang out across this verdant valley. At last, a sleeping Buddha had surfaced.

But it was not the fabled giant. Their persistent digging had uncovered fragments of a reclining figure estimated to be 62 feet (19 metres) long. One hand protruded visibly, without a thumb. The head was destroyed.

It was still hard for a novice to visualise.

Dr Tarzi gave it his best, stretching himself sideways along a flat hard surface, one hand tucked neatly under his head. Indiana Jones could have done no better.

I ask whether this smaller statue may be all there is. It is, after all, a wonderful find.

"I will persist," the sprightly 70-year-old declared with a firm shake of his head. He guided us to another area running along the foot of the sandstone cliffs where he believes a much bigger Buddha still lies sleeping.

Dr Tarzi does not want this remarkable history to be forgotten.

In the middle of the day, when a hot sun blazes in the sky, he teaches a master class for young Afghans training to be tour guides at an eco-tourism centre set up with the help of the Aga Khan Foundation.

Bamiyan is one of the few places in Afghanistan now safe enough to dream of tourists too.

Playing the role of a would be tourist, I asked enthusiastic students to convince me to visit.

"Welcome to Bamiyan, historical place, safe for tourists," was the practised but heartfelt reply of an earnest bespectacled woman.

An older male student shouted from the back row, "Bamiyan is exceptional in Afghanistan".

All the students nodded in agreement.

When darkness descended, Dr Tarzi was honoured at a musical evening attended by a gathering of Bamiyan residents who wish him every success. A trio of musicians sang of destroyed Buddhas that are still very much alive.

The legend of a giant still lives in Bamiyan. He has slept through centuries of conquest, a quarter century of war, and the end of Taliban rule.

If he ever wakes, it would be a dream come true for Dr Tarzi, and countless other Afghans with their own dreams of a lost past and a brighter better future.