Pakistan and Lanka tread the path of Buddhist heritage

Lahore, Pakistan -- Pakistan and Sri Lanka have embarked on a new journey in bilateral relations by benefiting from a common Buddhist heritage. 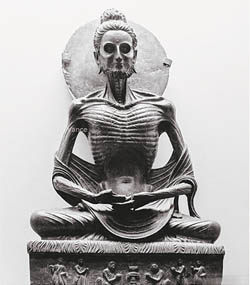 << The Fasting Buddha at the Lahore Museum is said to date back to the Gandhara period and is one of the many Buddha relics and sites in the country which the Lankan delegation visited.

Till the end of Lanka’s war with the Tamil Tiger rebels in mid-2009, the relationship was based on military support to the Lankan government. However, a gradual cultural orientation was in the offing in Pakistan’s diplomatic policy with Sri Lanka. In 2007, the book Buddhist Gandhara - History, Art and Architecture, written by a Pakistani musicologist and archaeologist, Mr Ihsan H Nadiem, was translated into Sinhala.

In 2009, the then Pakistan High Commissioner to Sri Lanka, Seema Baloch, revived Pakistan’s ancient links with the Buddhist world, with the intention of introducing the Lankan public to the archaeological, aesthetic and cultural diversity of its neighbouring state.

Muhammed Daud Ehtisham, the Press Attache in 2010 and the principal cultural aficionado in the Pakistan High Commission, led the shaping of the new stage of Pak-Lanka relations, expanding it with arts and culture-related initiatives.

He compiled a publication, Majestic Pakistan, this year and published it in three official languages in Sri Lanka: English, Sinhala and Tamil. He felt that these efforts would help in breaking stereotypes about Pakistan by offering glimpses of Pakistan’s landscape and culture with a separate section dedicated to Buddhist sites and their archaeological relevance.

In April, Ehtisham organised a tour for Lankan scholars and monks to Gandhara Buddhist sites in Taxila. He obtained the Buddha relics for a month-long exposition in Sri Lanka to attend the festival of Vesak, which commemorates the birth, enlightenment and death of Lord Buddha.

The exposition attracted more than nine million Buddhist devotees in Sri Lanka. It cultivated an image projected by Pakistan, pertaining to its appreciation of Buddhism by promoting interfaith harmony between Sinhala Buddhists and Muslim minority population in the country.

The week-long visit of the 40-member Buddhist delegation to Taxila was headed by the speaker of the Lankan Parliament, Karu Jayasuriya, and Minister of Justice Sasana Wijeyadasa Rajapakshe. It was a significant step in the history of friendship between the two countries.

“The Lankan delegation visited different Buddhist sites in Mardan, Takht-i-Bahi, Swat and Lahore. They also visited museums in Taxila and Peshawar, home to some of the rarest Buddhist relics. This visit will go a long way in promoting Pakistan-Lanka relations,” hoped Ehtisham.

Recent press releases from the Pakistan Embassy have presented Pakistan as a tolerant country to the Lankan public, which is appreciative of its past, irrespective of religious confines. The reports acknowledge that Buddhism spread for over 1,000 years from — the 2nd century BC to 10th century AD in territories of present day Pakistan.

The press releases recalled the era when Taxila, Swat, Peshawar and Charsadda became important centres for culture, trade and learning. Hundreds of monasteries and stupas were built, recognising that these centres produced unique Gandhara sculptures.

Having launched the Pak-Lanka friendship anthem this year, and after Director of Archaeology Dr Fazal Dad Kakar’s visit to Sri Lanka in 2011, Ehtisham explains that he has been able to establish a network with Lankan artists, ministers and scholars due to his passion for arts and culture.

Ehtisham’s donation of the Gandhara replicas from his personal collection for the Pakistan pavilion at the International Buddhist Museum in Kandy was appreciated by the Lankan cultural circle as an effort by Pakistan to showcase Buddhism as a means to boost cooperation with Sri Lanka.

“We took great effort in the past six years to bring Pakistan close to the people of Sri Lanka and to encourage cultural tourism between the two countries,” he explains.

As Sri Lanka and Pakistan proceed to cement bilateral ties in the future, the cultural links established between the two countries provide a firm footing to explore new avenues in culture-based tourism and trade.
TOP