ISLAMABAD, Pakistan -- The weeklong Gandhara celebrations began in the capital on Monday to promote the rich history of the civilisation and to attract foreign tourists. 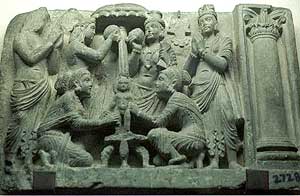 Pakistan is the custodian of the Gandhara civilisation as artefacts from one of the oldest civilisations were found in Takht-i-Bhai, Swat Valley, Charsadda, Peshawar and Taxila. The aim of the celebrations is to raise awareness about Pakistan’s cultural heritage. The celebrations include educational programmes that will give visitors an insight into the history of Gandhara.

Forty-three scholars, pilgrims, artists, researchers and diplomats from various countries such as Kenya, Japan, Sri Lanka, Singapore, China, Nepal and Korea are invited to attend the celebrations. They will visit Taxila, Peshawar and Swat museums and the excavation sites of Takht-i-Bahi in Mardan, But-Kara in Swat, Pushkalavati in Charsadda, Sirkap and Julian in Taxila.

Inaugurating the celebrations, Sheikh Rashid Ahmed, minister for Information and Broadcasting, said the government was working on a plan to revive the tourism industry to help boost economic growth. He said that tourism was the largest industry in the world, which unfortunately had not been fully tapped into by Pakistan.

“South Asia shares only four percent of the total tourism in the world and Pakistan has eight percent of South Asia’s share, which is negligible,” he said. Pakistan had a large potential for tourism including religious tourism but there was a need to improve the services provided to the tourists, he added. He said that promotion of tourism and culture was significant as it played an important role in improving the image of the country. President Pervez Musharraf has directed the Tourism Ministry to allocate funds for the promotion of tourism in the country. Rashid said that celebrations like the Ghandhara week attracted tourists, which contributed to the economic growth of the country.

Saleem Gul Sheikh, tourism secretary, said the ministry was working on plans for improving services provided to tourists. The ministry was going to privatise the Pakistan Tourism Development Corporation (PTDC) motels to improve their standard, he added. He said that the media had also played an important role in promoting tourism. He suggested that a TV channel be created dedicated to promoting tourism in the country.

Later, the foreign delegates visited Daman-e-Koh, Faisal Mosque and the Heritage Museum at Lok Virsa and praised the rich heritage of Pakistan. “This is my first visit to Pakistan and very different from what I had expected,” a tourist said. She said she was impressed with the collection at the Heritage museum. A tourist from Sri lanka said that Pakistan had a rich heritage of Buddhism and if proper services and facilities were provided, many Buddhists from across the world would visit the country.

On Tuesday, the foreign delegates will visit Taxila and Shahbaz Garhi and they will visit Saidu Sharif and Upper Swat Valley on Wednesday. The delegation will visit Takht-i-Bahi and Peshawar on Thursday and Khyber Pass on Friday.