Buddhist heritage in Pakistan under threat

Swat, Pakistan -- When the Taliban destroyed two Buddhist statues in Afghanistan in the spring of 2001, there was an international outcry. But similar incidents are now occurring in northwest Pakistan, where radical Islamists recently blew up a sculpture of Buddha in broad daylight. 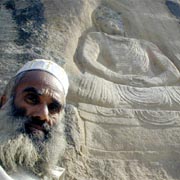 << An Afghan local stands next to a rock effigy of the Buddha partly destroyed by militant Islamists. AP

The phenomenon is new and disconcerting. Even the Pakistani government describes it as "Talibanization:" Parts of the country are now in almost exactly the same situation as neighboring Afghanistan was when the Taliban were still in power there.

This is especially the case in the formerly peaceful Swat region, where a militant Islamist leader has even proclaimed an "emirate." And just as in Afghanistan, the Islamists' hatred is directed, in part, against the traces left by the ancient Buddhist civilization in the region.

Islamists inspired by the Taliban recently destroyed an important Buddhist sculpture 40 meters (131 feet) tall and about 1,300 years old in the north-western part of the Swat Valley, reports Vishaka N. Desai, the director of the US-based Asia Society.

In her article, which appeared in the Lebanese Daily Star newspaper on Tuesday, Buddhism expert Desai reports that the Islamists were able to act without any interference from the local administration -- in broad daylight. Their first destruction attempt left the sculpture undamaged; the second damaged the Buddha's face, shoulders and feet. The culprits had used large machines to drill shafts into the historic monument. They then filled the shafts with explosives and detonated them.

Desai, who is Indian, also reports that while Pakistani newspapers criticized the desecration extensively, the international press hardly took notice of the incident. And yet it was not the first of its kind. As recently as September of this year, gunshots were fired at a rock effigy of Buddha in the same region.

In March of 2001, when the Afghan Taliban laboriously blew up two enormous Buddha statues in Bamiyan, a district in central Afghanistan, there was an international outcry. The Taliban justified the destruction by saying the sculptures were idols and "un-Islamic." Taliban leader Mullah Omar said at the time that "Muslims should be proud to destroy idols. Our destroying them was an act of praise for God."

Now Desai is warning that other Buddhist cultural legacies in Pakistan could also be destroyed: "There are vast numbers of important Buddhist sites in Swat and other areas of northwest Pakistan," she writes. "At this point, all of them are under threat of destruction, thanks to the influential voice of the Islamist leader Mullah Fazlullah."

Mullah Maulana Fazlullah is currently the strong man in the Swat region, notwithstanding his youth: He is only 28 years old. He thinks of himself as part of the Taliban movement and accepts only one authority: Mullah Omar. He has even proclaimed an "Islamic emirate" in his area of influence, and he commands a militia estimated to comprise some 4,500 men.

But Buddhist artefacts are not the only thorn in the Islamist's side. He also emulates the Taliban's religious and moral terror in other respects. For example, he threatened members of the Christian minority in the region -- about 1,000 people -- with death if they do not convert to Islam, Swiss daily Neue Zürcher Zeitung reported recently. And a Christian girls' school was forced to close and only allowed to open again on condition that all the girls wear a burka.

Polio Vaccination Prevented by the Taliban

In July, the Pakistani military felt compelled to dispatch 2,000 soldiers to the Swat region for the first time. The soldiers were sent to prevent the Pakistani Taliban from further extending their area of influence. But the soldiers behaved passively in most cases, according to the Times. Last week, reinforcements were sent, and 17 of the newly deployed soldiers were killed by a suicide bomber. The former tourist region has been considered a crisis spot ever since. When Pakistani President Gen. Pervez Musharraf suspended the constitution and imposed a state of emergency over the weekend, one of the reasons he cited was the growing threat Pakistan faces from terrorists and militant Islamists.

Desai, the director of the Asia Society, has described the changes undergone by the Swat region on the basis of her own experiences: "In 1995, I traveled through the Swat Valley to study the area's Buddhist treasures. ... As a non-Muslim, Indian woman, I was able to travel through the region without any fear and received warm support from local residents. ... Today, little more than a decade later, the atmosphere is so poisoned that neither local community leaders nor the local police came forward to protect these monuments."
TOP