ISLAMABAD, Pakistan -- Pakistan’s cultural heritage is under threat from the construction of a massive hydropower dam that will submerge thousands of Buddhist relics and ancient rock carvings across the riverbanks and terraces of the upper Indus River valley. 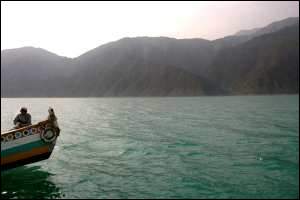 Pakistan’s new government, faced with severe energy shortages, has said it needs an additional 4,000 to 6,000 megawatts of power every day, and wants to hasten construction of the US$8.5 billion (Dh31.2bn) Diamer-Basha dam in northern Pakistan’s Himalayan mountains.

The dam is to be built in a narrow gorge of the Indus, at Basha, 40km downstream from Chilas, the capital of Diamer district that sits 914 metres above sea level.

Lahmeyer International, the German firm hired by the water and power development authority to carry out a feasibility study and design the dam, said it would generate 4,500MW of electricity a day.

Critics, however, said the dam would come at a huge cost to the country’s cultural heritage as it would submerge at least 6,879 hectares of agricultural land as well as 100km of the Karakorum highway, which replaced the ancient Silk Road. They are urging the government to act to save some of the antiquities before they are lost forever.

In 1999, the Pakistan Network of Rivers, Dams and People, PNRDP, under the auspices of the Sungi Development Foundation, studied the impact of the dam on the local populace, including villages dependent on agriculture, and migratory scavenging tribes who sift for gold in the sands of the Indus. The government estimates that 27,000 people will be affected.

“We have to accept the political decision for the future development of the country,” said Harald Hauptmann, a professor emeritus of prehistoric and near eastern archaeology at the Heidelberg Academy of Sciences and Humanities, who has been studying the rock art and other relics in the area since 1989.

“The energy problem must be solved but the galleries of rock carvings from the Paleolithic times to the advent of Islam are a significant heritage for the whole world,” Prof Hauptmann said.

Some of the rock art that will be submerged by the dam’s reservoir dates back 30,000 years and includes pictographs, painted images and other drawings thought to have been scratched on to varnished rock faces and boulders by prehistoric inhabitants, and later by invaders, merchants and pilgrims from Central Asia, China and India.

The earliest modern documentation of the art was carried out by the British in the early 20th century through the Archaeological Survey of India.

After the construction of the Karakorum highway in 1978, a Pakistan-German study group with Karl Jettmar, an ethnologist, and A H Dani, an archaeologist, made some landmark discoveries.

The 1,300-km highway, one of the modern successors to the ancient Silk Road, begins north of Islamabad and connects Pakistan to China through the Himalayan and Karakorum mountain ranges, snaking through the upper Indus valley at Chilas and Gilgit, and ending in Kashgar, in China’s Xinjiang province.

Since 1989, Prof Hauptmann has continued the documentation and published several monographs to maintain records. The group registered more than 30 sites, with indications of many more along a 100-km stretch of the Indus River in the Diamer district. At least 50,000 rock carvings have been documented in the area, as well as 5,000 to 6,000 inscriptions in a dozen different scripts, 80 per cent of which were Brahimi, while some were in Sogdian and Kharoshti, as well as a few in Chinese, Bactrian and Hebrew, Prof Hauptmann said.

Thousands date back to prehistoric times showing animals, hunting scenes and demonic creatures, as well as male anthropomorphic figures with extended arms. A majority of the rock engravings were made after the turn of the millennium giving evidence to the rise of Buddhism.

With construction of the dam expected to start in 2009, Prof Hauptmann’s priority is to finish documenting the carvings and inscriptions in the area to be flooded; his group has documented almost 90 per cent of the images and needs two more seasons to complete the work, he said. “For centuries, this area and beyond, has been a melting pot of cultures from the north and the south,” he said.

Several government officials and academics have proposed ways to save the antiquities.

The government has suggested cutting out the carvings and inscriptions and putting them in an open-air museum. Prof Hauptmann, however, said this was not feasible as the hardness of the granite required special machinery and considerable funding. He said only a few important carvings could be preserved this way.

Reliable sources at the culture ministry’s department of archaeology and museums confirmed that the idea was under consideration.

“We also need a museum in Gilgit, a meeting place for scholars, where the documentation for this heritage may be preserved,” Prof Hauptmann said.

Hugh van Skyhawk, a student of Karl Jettmar and a professor of comparative religions from the University of Mainz in Germany, and currently a visiting foreign faculty at the Taxila Institute of Asian Civilizations at Islamabad’s Quaid-e-Azam University, expressed his concern about the subsidiary antiquities which would also be destroyed by the dam.

“The area has hundreds of years’ old woodcarvings which are also endangered and will be wiped out with complete villages,” he said.

The institute is holding a conference funded by Pakistan’s higher education commission, the German Embassy and Unesco in November to discuss “measures to preserve, salvage, and document antiquities along the Karakorum Highway”, Prof van Skyhawk said.