Sorry tale of tourism in Swat

PESHAWAR, Pakistan -- Swat, once the pride of tourism in the region and rightly called Pakistan’s matching response to Switzerland no more presents the same picture. 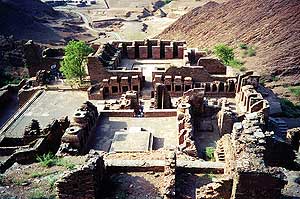 Those who once gladly rushed to the place and were always in a hurry to find a place in its splendour now keep themselves away from it. What has happened? The answer is simple. The eruption of extremism has shaken the area . It has dealt a blow to the congenial atmosphere. It scares the local as well as foreign tourists. The peaceful environment so essential for tourism has been disturbed. The area has fallen victim to militancy.

The unrest in the picturesque valley not bode well. It has led to a loss of billions of rupees, besides rendering jobless thousands of people who since ages have been engaged in tourism .

The gem of Pakistan’s tourism that once attracted tourists from all over the world, with its roads meandering the mountainous region along the River Swat is now fighting the menace of extremism .

“Once we would run short of accommodation for tourists, but today we are waiting for them to come,” said Badshah, a local tour operator. To add salt to wounds , militants only recently torched the country’s only ski resort - Malam Jabba.

Residents said a large portion of the resort had been reduced to ashes and the militants also damaged chair-lifts and a tower belonging to the meteorological department. The PTDC owned hotel, located some 150 kilometres north of Islamabad at an altitude of 2,636 metres (9,200 feet) was closed down several months ago.

The reason for it being of course none other, the abnormal conditions. Officials in Pakistan Tourism Development Corporation (PTDC) feel equally worried over decline of tourism in NWFP. The Corporation is facing financial hardship in the wake of devastating earthquake in October 2005 that reduced a number of hotels/motels to debris. “We’ve had tremendous tourism in Swat, both domestic and foreign—but it is no more ,” Managing Director of PTDC Brig ® Amanullah told APP.

He, however, hoped the situation would soon become normal once the law and order is restored which has gradually started improving. Brig ® Amanullah said the corporation had taken a number of steps to promote tourism particularly domestic such as Naran, Kaghan and Norther Areas.
Though, Pakistan is home to a number of fabulous tourist destinations, Swat occupied unique position that kept enchanting nature lovers at home and abroad for years. For people residing in plain and low-lying areas, Swat was a ‘paradise’ where they spent their annual summer vacation. “I always felt crazy about Swat in summer. I have been to many places around the country, but none impressed me as much as Swat ,” said Haseeb Gul, a local tourist.

Extremism in the remote areas also poses a problem because it has disturbed peaceful and scenic areas of Pakistan,such as the famed Swat valley.

Swat, the land of romance and grandeur, is held in reverence throughout the world as the holy land of Buddhist learning and piety. It acquired fame as a place of Buddhist pilgrimage.

Buddhist tradition holds that the Buddha himself came to Swat during his last reincarnation as the Guatama Buddha and preached his teachings to the people here. It is said that the Swat was credited with fourteen hundred imposing and beautiful stupas and monasteries, which housed as many as 6,000 gold images of the Buddhist pantheon for worship and education.

There are now more than 400 Buddhist sites covering and area of 160 Km in Swat valley only. Among the important Buddhist excavation in Swat an important one is ButkarhacI, containing the original relics of the Buddha.
The lush-green valley of Swat, with its rushing torrents, ice cold lakes, fruit laden orchards and flower decked slopes is ideal for holidaymakers. It has a rich historical past, too.

This is “Udayana” (The Garden) of the ancient epics; the land of enthralling beauty, where Alexander of Macedonia fought and won some of his major battles before crossing over to the delta of Indus River.

This is the “valley of hanging chairs”, as described by the famous Chinese pilgrim chroniclers, Huaen Tsang and FacHian in the fifth and sixth centuries.

Swat was once the cradle of Buddhism of all of its schools Mahayana, Hinayana and Tantrayana, where once 1,400 monasteries flourished. It was the home of the famous Gandhara School of Sculpture that was an expression of GrecocRoman form in the local Buddhist tradition.

It was also the historical land where the Muslim conquerors, Mahmud of Ghazni, Babur of Ferghana and Akbar fought their battles prior to the conquest of South Asia. The valley of Swat sprawls over 10,360 sq. km at an average elevation of 875 metres.

The Capital of Swat Valley, Saidu Sharif houses the Swat Museum that contains one of the finest collections of Gandhara art in the world. Mingora, the twin city of Saidu Sharif proudly shows magnificent pieces of Buddhist sculpture and the ruins of great stupas.