TAXILA, Pakistan -- Archaeologists warn that the Taliban are destroying Pakistan's ancient Gandhara heritage and rich Buddhist legacy as pilgrimage and foreign research dries up in the country's northwest. 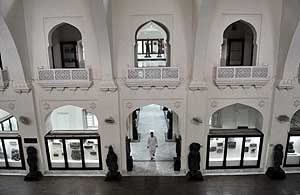 << Peshawar, known for its Buddhist heritage and archaeology, used to attract thousands of tourists

"Militants are the enemies of culture," said Abdul Nasir Khan, curator of Taxila Museum, one of the premier archaeological collections in Pakistan.

Taxila, a small town around 20 kilometres (13 miles) south of Islamabad, is one of Pakistan's foremost archaeological attractions given its history as a centre of Buddhist learning from the 5th century BC to the 2nd century.

Violence is on the rise in Pakistan as Taliban bombers and gunmen strike with increasing frequency and intensity in the cities of North West Frontier Province and around the capital Islamabad.

"Even in Taxila we don't feel safe. The local administration has warned us about a possible attack on this museum. We have taken some extra security precautions but they aren't sufficient and we lack funds," said Khan.

"For weeks we don't get even a single foreign visitor. If visitors don't come, if sites are not preserved and protected, if research stops, what do you think will be the future of archaeology?" he said.

The Islamist militia has since spread into Pakistan. Their opposition to music, art, dance, girls' education and idolatry makes archaeologists fear that Pakistani Buddhist relics are in the eye of the storm.

Italian archaeologists were active in Pakistan's northwest Swat valley from 1956 until they reluctantly discontinued work in 2007 after Taliban fighters led by radical cleric Maulana Fazlullah rose up demanding sharia law.

"It is not planned to carry on any research activity," Luca Olivieri, co-director the Italian archaeological mission in Pakistan, told AFP by email.

After 17 years as curator in Swat, Khan took no risks. With the Taliban killing and bombing their way through the valley, the museum closed in 2008 and he evacuated the most priceless antiquities.

That September, the Taliban twice tried to blow up 7th century Buddhist relics -- damaging a rock engraved with images of Buddha that for centuries had been a pilgrimage site.

This year, the rebels marched to within 100 kilometres (60 miles) of Islamabad, precipitating a major military operation in the northwest district and followed up with a current offensive in South Waziristan.

"This is the worst time for archaeology. Militancy has affected it very badly. There were 15-20 foreign missions working in this field, now this research has completely stopped," Khan told AFP.

He says the army has requisitioned the museum building in Swat's main town of Mingora. Despite the summer offensive, which appears to have flushed out Taliban havens in Swat for now, he doubts life will soon return to normal.

"I don't see any chance in the near future of re-opening the Swat museum. The situation is still not suitable.

"The museum building was badly damaged in a bomb blast. The display cases are broken and the building needs complete renovation," he said.

"There is still fear in people's minds but I hope that the army will succeed in bringing back normalcy," he added.

The situation is not much better further south.

Peshawar, the troubled capital of northwest Pakistan known for its Buddhist heritage and archaeology, used to attract thousands of tourists but security fears and bomb attacks make it a no-go area for foreigners.

Its museum is open, but one gate has been sealed and cement barricades outside the second allow only pedestrians to enter.

"For a year and a half, foreign tourists have completely stopped visiting this part of Pakistan," Qazi Ijaz, an official at Peshawar museum, told AFP.

"The nucleus of the Gandhara civilization in Swat is closed and that was their main interest," he said.

"The tourist companies have closed. Foreign visitors have stopped coming and museums with monuments and other archaeological sites look deserted," he added.

There are about 10 museums in northwest Pakistan, including one under construction to protect Kalash culture in the Chitral valley, where a Greek volunteer was kidnapped in September and reportedly smuggled to Afghanistan.

The fair skin and light eyes of the Kalash inspire academic speculation that they descend from an ancient Middle Eastern population or soldiers of Alexander the Great's army which conquered the area in the fourth century BC.