Swat, Pakistan -- The timing was not intended but, even as Lyonchhoen Jigmi Y Thinley and the Pakistani prime minister, Syed Yousuf Raza Gilani, discuss promoting friendship through exploring the birthplace of Guru Padmasambhava in Swat province, Pakistan, to draw Buddhist pilgrims, a study claims that two lakes were identified as lake Dhanakosha, the birth place of Guru Rinpoche. 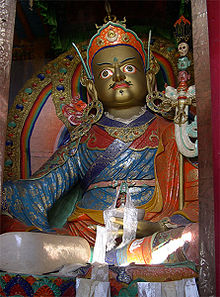 << A statue of Guru Rinpoche Padmasambhava

Buddhist legend and scriptures have it that Guru Rinpoche was born from a lotus flower in lake Dhanakosha in the 8th century. It is also believed that the lake is in the valley of Uddiyana, a kingdom in the west or northwest of India. Western scholars have identified it with the valley of Swat, in present-day northwestern Kashmir, in Pakistan.

The researcher, Rauf Azad Kakepoto, a PhD student of Shah Abdul Latif university told Kuensel that, out of 52 lakes in the area, two lakes have been selected to compare with archaeological and textual material to identify lake Dhanakosha. Rauf Azad Kakepoto had been carrying out a research programme on an archaeological  study on Uddiyana with reference to the lake Dhanakosha.

According to the Mahaparinirvana sutra, when the Buddha was about to pass away at Kushinagara in India, he said, “Impermanence is the nature of all created phenomenon. Death being inevitable, the time for my passing into Nirvana has arrived. Of this you should not grieve. I will be reborn from a lotus lake Dhanakosha, in Uddiyana, and will be known as Guru Padmasambhava.”

Uddiyana in Sanskrit means Orgyen in Tibetan and this place is also believed to be the homeland of the great Buddhist masters, such as Garab Dorji, Vairotsana and Tilopa.

The first four lines of ‘the Seven Line Prayer’ to Padmasambhava recited by all Buddhist say:
In the north-west of the land of Orgyen, In the heart of a lotus flower, Endowed with the most marvellous attainments, You are renowned as the Lotus-born,

According to Guru Padmasambhava’s biography, Padmasambhava was incarnated as an eight-year-old child appearing in a lotus blossom floating in the lake Dhanakosha in the kingdom of Uddiyana.

In an email interview, Rauf said the lakes are on the verge of disappearing, due to Taliban’s occupation in Swat province.  His findings say that Pakistan remained the home for Buddhist heritage since 3rd c. B.C. to 8th c. A.D. The Ashoka stupas, Buddhist monasteries and Buddhist stone inscriptions prove these.

The other findings include ruined pottery, art works and ancient footpaths of Swat dwellers that led to Tibet and other Himalayan countries.

His study is to highlight the significance of the Swat heritage in general and, in particular, Guru Padmasambhava. “The focus is to revive the sacred place for Buddhist pilgrims, who have spiritual affiliation with the sites in Swat province,” said Rauf.

According to the researcher, an Italian researcher Giuseppe Tucci had reported the ceramics found in the royal tombs of Leh (Ladakh) in India, stand as a clear relation with others facts and evidences that were  found in Swat.

He said that, for concrete findings, the research requires more authentic references of the ancient text to relocate the lake Dhanakosha and the other sites through exploring relevant archaeological materials.

“Once the project is complete, it will not only attract Buddhist pilgrims, but also help benefit to introduce the heritage of 8th century, to set chronology of the area with reference to Guru, who benefited through his teachings and practices,” said Rauf. “The research could also benefit the nation, to add an important chapter to introduce the ancient Uddiyan history in school curriculum of Pakistan.”

Further it is also expected to boost tourism industry and help reduce poverty of the locality. This, he said, could be possible once the sites are revived, preserved and protected. “It could help establish links with people around the world, so as to bring peace and harmony through incorporating Buddhist concepts and values,” said Rauf.

Guru Padmasambhava is also known as Guru Rinpoche, the  ‘Precious Master’. He discovered the supreme teachings of the true nature and enlightenment, bringing great benefits to sentient beings. This is why Guru Rinpoche is called the Buddha of the Vajrayana.