KATHMANDU, Nepal -- A 40-year-old Buddhist nun who began as a rebel and then transformed into one of Nepal's most popular singing stars, has now created another milestone in Nepal's religious as well as social history by offering sanctuary to a nun half her age, who became stigmatised after being gangraped last month. 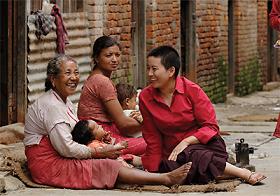 Choying Drolma, the red-robed, tonsured Buddhist nun whose prayer chants have won her thousands of followers in Nepal, China and the West, has now also become the saviour of a 21-year-old nun who was thought to have lost her right to remain a nun after being raped by five men in a bus.

On Tuesday, after the dazed victim was discharged from hospital, Choying offered her a new home at Arya Tara, the school run by Nuns' Welfare Foundation. Choying founded the non-profit organisation with the money earned through her singing to provide education to Buddhist nuns - anis - who mostly remain neglected while monks have greater access to education.

Once criticised by the Buddhist community for her global tours, big cars and unashamed fondness for Hindi films and songs, Choying has continued on her own way, heedless of critics. She has featured in magazines like Marie Claire and co-authored a biography, Singing for Freedom", using the royalty from the book to start a diagnostic centre for treating kidney diseases.

When the raped nun's uncle came to her seeking help, Choying immediately put up NRS 30,000 for medical treatment, following it up with appeals to friends. Now they have opened an account in Kathmandu's Mega Bank in the name of the nun, raising over NRS 200,000 within a short while.

"This is for her financial security," Choying told TNN. "The law says the rapists will have to pay her compensation. But the way things work here, that will take a very long time. We have to find a way to protect her."

Choying has also been in touch with Kran Bajracharya, a police officer who, she said, helped immensely by taking up the rape with police in eastern Nepal to ensure that the five men arrested for the attack were not freed. However, she is now concerned that the worst is yet to come.

"When the trial starts, the attackers will get lawyers who will try to pin the blame on the victim," she said. "It will be an ugly thing and my primary concern is how she will deal with it emotionally."