Mandela, Nepal -- Hundreds of Buddhists demonstrated in Nepal's capital to protest the appointment of Maoist party chief Pushpa Kamal Dahal to head a project to develop the area where Buddha was believed born in southern Nepal. 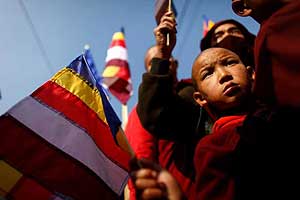 << Nepalese Buddhist monks and nuns take out a protest in Katmandu, Nepal, Wednesday, Dec. 7, 2011. Hundreds of Buddhists demonstrated in Nepal's capital to protest the appointment of Maoist party chief Pushpa Kamal Dahal to head a project to develop the area where Buddha was believed born in southern Nepal. The protestors demanded that there should not be any political involvement in the project to develop Lumbini, located 150 miles (240 kilometers) southwest of Katmandu. Photo: Niranjan Shrestha / AP

The 500 demonstrators included monks and nuns holding banners saying there should not be any political involvement in the project to develop Lumbini, located 150 miles (240 kilometers) southwest of Katmandu.

Lhakpa Sherpa of the Buddhism Preservation Stakeholders Committee said politicians were breaching the sanctity of a religious place like Lumbini by transforming it into a tourism destination.

The committee was formed by the government to develop Lumbini, 240 kilometres southwewest of Kathmandu, as a world Buddhist tourism destination.

Demonstrators held placards demanding Dahal be removed from the position of director of the Lumbini Development Committee. They have demanded a follower of Buddhism should be appointed to the post.

Dahal, who is coordinator of the development committee, lead the decade-long Maoist insurgency in Nepal, which ended in 2006 after the signing of a peace deal with the government. 16,000 people were killed in the conflict.

Some of the monasteries had informed the committee that they were unable to attend due to the strict reprimand of Free Tibet charges. Earlier, there were policing of the Sehchen gompa and White gompa in Bouddha.

Most monasteries are under the strict surveillance of the Government of Nepal’s One China policy. Speaking to Coordinator of the Council for Buddhist concerns, Shakun Sherchand replied that “Lumbini is an encroachment by non Buddhists while Free-Tibet is a repressive tool manipulated against our historical, religious and cultural rights based on our identity”.

“This peaceful rally expresses the rightful demands of the indigenous Buddhists in a secular state and we will not tolerate any longer the unlawful as well as unconstitutional process of representing Buddhist issues by non Buddhist representatives”.

1. Lumbini development area must be declared as an autonomous peace zone.

3. Lumbini, Bouddha, Swayambu, Namabuddha and other important Buddhist religious sites must be declared as “peace zone”.

4. A separate Ministry for the development of Buddhist concerns in relation to religion, culture and its resources must be established under the representation of Buddhists only.

5. All Buddhist organizations, committees and functions under the Government of Nepal for Buddhist concerns which is affiliated with party politics without our consent will not be honored by its stake holders.