The monks in yellow robes

Kathmandu, Nepal -- Once upon a time in Nepal, it was illegal to become a Buddhist monk. You could get put in prison or sent out of the country. Bhikshu Kumar Kashyap was among a group of monks who were banished in 1944. 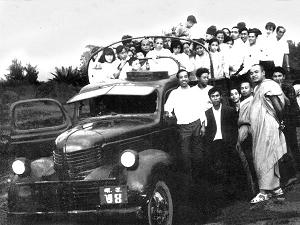 When he passed away last February, a piece of history died with him. He was the last survivor among the eight monks who were given marching orders for spreading a ‘new religion’.

The new religion was Theravada Buddhism. It was making a reappearance in Nepal after having died out a couple of centuries ago. The unfamiliar sight of yellow-robed monks roaming the city a la Thailand and Sri Lanka enthralled the public, but it rattled the autocratic rulers who reacted with typical fury. They rounded up the monks and bundled them out of Kathmandu. Soldiers shepherded them as they hiked over the southern hills, only returning after making sure that they had taken the route to India.

Eighteen-year-old Kumar Kashyap was the youngest among the monks who were sent away. Born Asta Man Shakya in Tansen, Palpa, he took up the name Kumar Kashyap after becoming a novice monk. He is better known as Kumar Bhante. After his ordination in 1942, he came to Kathmandu to join the monks who were working to revive the faith under the government’s watchful gaze.

The 1940s were interesting times in Nepal. The anti-Rana movement was in full spate, and four democracy activists had been executed. Theravada Buddhism had just reappeared, bringing with it a breath of fresh air into a tradition that was getting buried under esoteric rites. To give a simplified description of the three branches of Buddhism, Theravada is the form seen in Sri Lanka, Myanmar and Thailand. Its monks wear yellow robes. The second is Mahayana which is found in Bhutan. The third is Vajrayana which is practiced in the Kathmandu Valley.

The resurgence of Theravada Buddhism coincided with the democracy struggle and the two movements were mutually supportive. People lined the roadsides to stare in awe at the monks in yellow robes as they made their alms rounds. The monks preached in an easy-to-understand manner, there were no complex rituals in their back-to-basics religious practice, and their sermons were attracting ever larger crowds.

The powers that be, who were suspicious of anything that involved people getting together, were unnerved. The monks were summoned to Singha Durbar and lined up before the prime minister. They were asked to sign a statement saying that they would not preach Buddhism, write books in Nepal Bhasa or ordain women as nuns. The monks naturally refused, and were summarily ordered to get out of town within three days. And so they departed, their weeping followers accompanying them till the Valley’s edge. No roads linked Kathmandu with the outside world then, and walking was the only way to get anywhere.

After crossing into India, the monks scattered in different directions. Some went to Kushinagar, and others to Kolkata and Kalimpong. Kumar Bhante first went to Kalimpong and then sailed to Sri Lanka. For a landlubber from a hill town, the island country was enlightening in more ways than one. He plunged into the study of Buddhism, freed of the fear of the authorities constantly looking over his shoulder. The times weren’t easy, however. World War II was going on, and Sri Lankans were fighting to overthrow British rule. But Kumar Bhante made the best use of his stay in exile. He learnt the Sinhala language, and became a master of the Buddhist scriptures.

Call it karma, but the expulsion of the monks had the opposite effect of what the regime intended. Public opinion against the rulers intensified, and Theravada Buddhism gained more adherents. Literature received a fillip with the monks turning into prolific writers. The forced tour also brought the monks international exposure and bad press to the Nepal government.

Buddhists in Sri Lanka were their greatest sympathisers. In 1946, they sent a goodwill mission to Nepal and pleaded with the prime minister to allow the monks to return. And so the yellow-robed men came back after having spent two years abroad. Theravada Buddhism was here to stay. Kumar Bhante returned to Kathmandu from Sri Lanka and took to writing books besides teaching at Ananda Kuti Vidyapeeth in Swayambhu. Subsequently, he became abbot of Ananda Kuti Vihar. He was the Deputy Chief Monk when he passed away at age 85.