Nepal Earthquake: How you can help

Kathmandu, Nepal -- At least 3,326 people are now known to have died in a massive earthquake which hit Nepal on Saturday, say officials. Most of affected victims were in the Kathmandu valley. Reports have said scores were killed by an avalanche near Mount Everest. 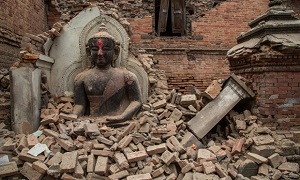 << A Buddha statue is surrounded by debris from a collapsed temple in the UNESCO world heritage site of Bhaktapur on April 26, 2015 in Bhaktapur, Nepal.

Nepal is one of the poorest and least developed countries in the world, with many of the buildings in the capital city made of brick and mortar with minimal reinforcement. Outside the cities, many people live in simple mud thatch houses.

But home ministry official Laxmi Prasad Dhakal told Reuters rescuers were "in a really bad shape" after working non-stop for two days. "We are all about to collapse."

Meanwhile, officials have warned that the number of casualties could rise as rescue teams reach remote mountainous areas of western Nepal.

The following are some Buddhist relief efforts where you may channel your support:

Citta - Earthquake relief and rebuilding. Your donation will go directly towards aiding relief for the 7.8 magnitude earthquake that just hit 34km east of Lamjung, Nepal (https://cittainc.giv.sh/0a9d)

Facebook has created an alert system which allows people to mark themselves or others as safe: https://www.facebook.com/safetycheck/nepalearthquake/

Google has set up a 2015 Nepal Earthquake Person Finder where you can search for or add information about people in the area. http://blog.charitynavigator.org/2015/04/nepal-earthquake-relief.html