KATHMANDU, Nepal -- Authorities in Nepal urged religious groups and scientists on Sunday to help solve the mystery of a meditating teenaged boy who some believe is an incarnation of Buddha. 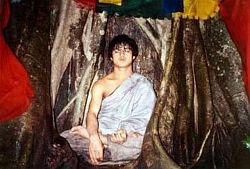 At least 100,000 devotees from Nepal and neighboring India have flocked in recent weeks to a dense forest in southeastern Nepal to see 15-year-old Ram Bahadur Bamjon, who, his associates say, has been meditating without food or water for six months.

Shanta Raj Subedi, district administrator of Bara, 150 km (95 miles) southeast of Kathmandu and where the boy is meditating, said he had requested the Lumbini Development Trust, a Buddhist panel, and the Royal Nepal Academy of Science and Technology to get to the bottom of the mystery.

"We want to investigate claims that the boy has survived for so long without food or drink," Subedi said.

Bamjon sits cross-legged beneath a "pipal" tree, which is sacred to Hindus, with his eyes closed in meditation. He does not speak and followers are only allowed to see him from a distance of 50 meters (165 feet).

The young mystic is hidden from public view at night behind a curtain drawn by his followers. Doctors observing from a distance have said the boy is breathing normally but is weak.

Local journalist Govinda Devkota, who has visited the site, said the boy sits with a shawl across his chest from armpit to shoulder, in the same posture as Buddha is shown in pictures.

The number of visitors had reached up to 10,000 a day but fewer people are going to the retreat now, he said.

"He sits motionless from dawn to dusk when visitors are allowed to see him. This demands something," said Devkota. "But whether he is an incarnation of Buddha, I have doubts because we don't know what he does at night. This must be investigated."

His mother, Maya Devi – the same name as that of Buddha's mother – said Bamjon, the third of her seven children, is a quiet boy who kept aloof from friends.

"Initially, I was worried about him. But now I am happy. He is in devotion to Buddha," Devi told Nepali daily, Rajdhani.

Buddha, who founded Buddhism, was born a prince in Lumbini, a dusty village in Nepal's rice growing plains about 350 km (218 miles) west of the capital Kathmandu, over 2,600 years ago.

He attained enlightenment at Bodh Gaya in the eastern Indian state of Bihar that borders Nepal.