Kathmandu, Nepal -- A meditating teenage boy in south-central Nepal is drawing the attention of scientists after attracting huge crowds in the past six months and earning himself the name Buddha-reincarnate. 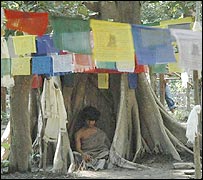 They are mulling over how to examine him without disturbing his meditation. Ram Bahadur Bamjan's friends, relatives and managers say he has been meditating without drinking water for six months now and that he will carry on for another six years until he gains enlightenment.

Siddartha Gautam, who later attained Mahanirvana and became the Buddha, was born in 560 BC.

Word spread quickly about the teenager and people around Ratanapuri village in Bara district began to visit Bamjan, 15, who has been sitting cross-legged in a traditional Buddha posture under a peepal tree.

Bamjan's eyes are closed and his body firm, encased in a whitish shawl. His hair has grown long and has almost covered his eyes. Villagers say he has grown weak.

His picture has been appearing regularly in newspapers and people now look for updates on him.

Many around Bara worship him as the reincarnation of the Buddha. The tree is festooned and the air has the smell of incense sticks. The dramatically increased movement of people has generated economic opportunities.

Makeshift shops have sprung up and offerings in cash and kind are on the rise.

"Almost 500,000 rupees ($7,000) have been deposited in the bank by devotees," says Prajapati Koirala, a senior government administrator in the area. That is apart from the donations visitors make on the spot.

Local people have formed a committee to make sure Bamjan gets the right environment to meditate and to manage the influx of visitors and the offerings they make.

The most frequently asked questions: Does he remain seated like that and meditate even at night? Does he not eat or drink at all? Some say he has eaten nothing since he began his meditation, others that he used to take a milk-like liquid from the roots of the peepal tree at the beginning.

Most people can live without food for several weeks, with the body drawing on its fat and protein stores. But the average human can survive for only three to four days without water.

Followers of holy men and ascetics have often ascribed extraordinary powers to them, but such powers are seldom subject to scientific inspection. But the number of people seeking real evidence here is increasing.

Under pressure, locals have asked the administration to find out the truth. "We have agreed to conduct a scientific examination on him," said the local administrator, Mr Koirala.

The challenge is to do so without touching him. Mr Koirala said scientists from the Royal Nepal Academy of Science and Technology were due to arrive to conduct the examination.

It remains unclear how they will do it. "At least the scientists will be able to see whether he meditates the whole night or not," said Deekpal Chaudhary, who sells incense sticks to visitors.

Bamjan's family members say they have no idea what is going on. His mother fainted when she found out her son had undertaken an indefinite meditation.

"I sometimes go to see him but he does not talk to me," said Maya Devi Tamang. "I don't know what will happen to him but I know that god will help him."

The name of Buddha's mother was also Maya Devi, a point Bamjan's devotees have stressed. The family said Bamjan was different from his four brothers. They said he did not speak much and stayed aloof.

"He never touched alcohol," said his primary education teacher, Salden Lama. Relatives and neighbours said Bamjan undertook meditation when he returned from a tour of Lumbini, where Buddha was born, and monasteries in Pokhara in Nepal and Dehradun in India.

Friend and cousin Prem Lama remembers Bamjan saying that he did not want people to call him Buddha as he had only reached primary enlightenment. Bamjan has spoken only a few times since he began the meditation, according to Prem Lama.

He said the first time Bamjan spoke was when a snake bit him around a month ago. Bamjan took the incident as his second test, which he must overcome, Prem Lama said.

In the first test he was also bitten by a snake - three months after he began the meditation. The second snake-bite episode led to increased curiosity. After being bitten, Bamjan was said to have asked his aides to put a curtain around him.

"In less than a week he asked us to take the curtain away," Prem Lama said. Now another curtain is to be drawn around Bamjan - for the scientific examination.