Bara, Nepal -- A missing Nepalese teenager popularly known as "Buddha Boy" reappeared briefly on Sunday, his followers say. The committee managing the meditation site of Ram Bomjan, 16, released video of its members purportedly meeting the boy near his village in southern Nepal. 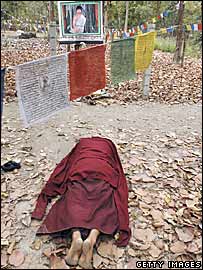 << Follower prays where Ram Bomjan has been meditating

His meditation and apparent 10-month fast attracted global attention before he disappeared on 11 March.

Large numbers of devotees flocked to see him to leave offerings. A massive search operation is still under way.

The chairman of the Om Namo Buddha Tapaswi Sewa Samiti (ONBTSS), Bed Bahadur Lama, told reporters that he and his colleagues had met Bomjan about 3km (2 miles) south-west of his meditation site in Bara district on Sunday.

He said Bomjan had spoken to them for half an hour.

"He said he would reappear after six years. He has asked monks to perform prayers in the meditation spot," Mr Lama told reporters.

"I left because there is no peace here... Tell my parents not to worry," Mr Lama quoted Bomjan as saying.

Bomjan's followers and security personnel launched a massive search operation in Ratnapuri forest and surrounding areas but have so far failed to locate him.

Bomjan's followers claim he was an incarnation of Lord Buddha who was born in Nepal more than 2,500 years ago.

His followers say he has been meditating for 10 months without food or water and is immune to fire and snake bites.

But these claims have not been independently verified. Scientists were unable to examine the boy as his followers said it would disturb his meditation.