For centuries, the tiny Buddhist kingdom of Mustang has been all but sealed, its ancient culture protected from outside influence, but now a new highway is threatening a major upheaval in the hidden Himalayan outpost.

KATHMANDU, Nepal -- King Jigme Palbar Bista of Mustang, who retains his title even though his realm became part of Nepal more than 200 years ago, welcomes the road as a vital link to goods and services such as health care that his 7,000 subjects have never had access to. 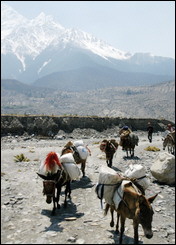 "The road would be very helpful to local people because all our supplies come from Tibet," the 75-year-old monarch told AFP in a rare interview during his annual visit to Kathmandu.

But while Nepal's government sees the highway as finally bringing modernity to one of the most remote areas of the world, some activists who say they have Mustang's best interests at heart are strongly opposed to the project.

Plans for the 460-kilometre (285-mile) highway are well advanced. It will traverse some of the most forbidding terrain on the planet, linking China and India, the world's most dynamic economies, through Nepal.

The 20-kilometre section from the Chinese border to Lo Manthang, Mustang's capital, was completed in 2001, opening up a route for Chinese goods, mostly construction materials, trucked in from the Tibetan capital, Lhasa, about 700 kilometres distant, and the monastery town of Shigatse 500 kilometres away.

Each year around 80 trucks make the journey from Tibet to Lo Mantang, and that number is expected to leap once the road opens all the way through to India.

Over the next two years, according to authorities in Nepal, the remaining 100 kilometres of road will be completed to open up a route that currently is only passable on foot or horseback.

Speaking via a translator, the king said the road would bring the benefits of modernity to his people.

"Sometimes people get sick and die because they can't get treatment in time, and the road might change this," he said.

He did, however, express his fear that the road could bring some unwelcome consequences, notably damage to ancient monasteries and the myriad mud-and-straw Buddhist monuments called chortens that dot the former kingdom.

"It has to be very carefully studied," he said.

The time for studying what impact the highway will have on the lifestyle, culture and landscape of Mustang may have already passed, as the government in Kathmandu is determined construction will be completed within two years.

Officials there see the road as part of their country's efforts to stake a claim in the fortunes of its enormous neighbours, with Foreign Minister Sahana Pradhan calling it a "very good step in terms of global connectivity."

Department of roads director Durga Prasad went further, saying that "the operation of the trans-Himalayan highway will give Nepal the opportunity to facilitate trade between two giant neighbours". 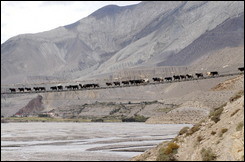 "Mustang is a very backward area and much of the younger generation have migrated to other regions for employment and study," she told AFP.

"So if the region is linked by the road we can bring in more opportunities, both for education and employment.

"The road could also promote tourism in the region as, at the moment, it's too difficult to get there."

For some, however, the highway can bring only bad news by making further inroads into a rare culture that is really only preserved these days in Bhutan, the remaining independent Buddhist kingdom of a chain that once formed a necklace across the Himalayas and included Tibet, Sikkim and Ladakh.

Mustang -- the name is a derivation of Lo Manthang, which means kingdom of Lo and is the name of the capital city -- once controlled the trade route between India and the Himalayas.

At the end of the 18th century, it was annexed by Nepal and renamed Upper Mustang, though it was permitted to retain the monarchy. King Jigme Palbar Bista is believed to be able to trace his lineage back to the warrior Ame Pal, who founded the kingdom in 1450.

These days the monarch has little more than a ceremonial role. According to his son, Jigme S.P. Bista, the king "still addresses small disputes, but if anything major happens we refer it to the chief district officer in the district headquarters".

Mustang is now again at the crossroads of international trade thanks to its proximity to Chinese-controlled Tibet, the original source of its religion and culture.

Erica Stone, president of the American Himalayan Foundation which works to restore many of Mustang's ancient Buddhist treasures, sees the kingdom as one of the few remaining repositories of a culture that until relatively recently dominated the Himalayas.

"Upper Mustang is one of the few places left where Tibetan culture and religion continue to thrive relatively unhindered by outside influences," she said in an e-mail from California.

"It is not clear that the road will have any positive developmental effects on Upper Mustang, apart from perhaps giving the (people) access to cheaper goods coming in from China," she said.

"It is more than likely, however, that the fragile nature of the area's bio-diversity, including its culture, will be put at risk."

She said she feared that if Lo Mantang became a mere truck stop on the long road between India and China, a "trucker culture" would bring brothels, bars and, inevitably, sexually transmitted diseases including HIV/AIDS, as well as facilitating an illegal trade in Mustang's priceless artefacts.

Policies for restricting tourists to Mustang have helped protect it on all these fronts. Since foreigners were permitted to visit in 1992, numbers have been limited by the high cost of travelling to the region, with a 10-day visa costing 700 dollars.

Perhaps most vulnerable to higher visitor numbers could be the stunning 800-year-old cave paintings depicting the life of the Buddha that only came to light last month when a shepherd from a Mustang mountain village recalled he had seen them as a boy.

Broughton Coburn, one of a team of Nepali and foreign experts who explored the previously unknown cave 3,400 metres above sea level, echoed Stone's fears about the potential for cultural vandalism the highway could bring.

"I fear that the (people of Mustang) will turn into gravel crushers at the side of the road, maintaining the road for wealthy Chinese bringing cigarettes from Tibet," he said.