Kathmandu, Nepal -- Delivering a passionate and thought provoking lecture on Buddhist philosophy, honorable Mahinda Thero said that the Essence of Buddhist philosophy emanate from the innate desire from one’s own soul for kindness to others. 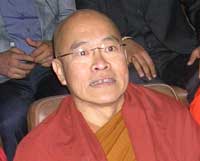 Honorable Mahinda Thero made these observations at a program organized by the Sri Lankan embassy in Kathmandu this evening.

Honorable Mahinda who was ordained by a Sri Lanka high Monk further said that Metta-the loving kindness is a way, and a practice as well which demands that an individual expresses his kindness to his family members, neighbors, society, the country and the world at large.

Shedding light on how and why Siddhartha Gautam renounced his worldly pleasures which were with him in the Palace where he was born, honorable Mahinda said that a turning point in his life came when the 29 year old Prince saw a sick man then an elderly man and later saw a corpse.

He then realized that the birth itself was meaningless and that a man born in this earth had to become sick, become aged one and finally had to embrace death ultimately.

“This phenomenon provoked in young Gautama to seek the truth and he left his material pleasure for good in search of truth and to understand the meaning of life”, honorable Mahinda explained.

Buddhist philosophy makes one to understand the reality instead of the conventional orders, continued Mahinda-the advisor of the Aloka Foundation of Malaysia.

Why make false claims that this is my body when the body doesn’t obey to your own instructions”? said Mahinda explaining that the inner meaning of this is that theAmbassador Sumitha body what we have is not ours and thus to take pride of it was worthless.

“If it were our body, it should have obeyed to our instructions”, added Mahinda.

According to him, if one could see the entire picture of a thing in its totality then there remain no question for any sort of argument.

In saying so he wanted to tell his audience that many arguments do occur in between people and groups because they fail to see the entire bigger picture at a time.

Welcoming the guests, the Ambassador of Sri Lanka to Nepal, Sumit Ndakala talked of the basic elements and the fundamentals of Buddhist philosophy which revolved around compassion, kindness and love toward the entire human kind.